Jennifer and Brad and Angelina and the Great Recession 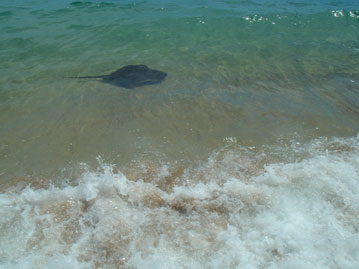 Is there a celeb magazine that doesn't cover Jennifer and Brad and Angelina each and every week? With the next story more outrageous than its predecessor? That's the way it feels from the grocery check-out line.

Well, it seems to me that the Eastern press is covering the Great Recession the same way—every story using adjectives more dire than its predecessors. To be sure, bad news piles on top of bad news. And every other day, it seems, GM or Citi needs another $10 billion of your and my money.

And yet there's more to the story of America in 2009 than the lurid webs spun by Chris Matthews, Lou Dobbs, & Co. And more to the U.S.A. than Detroit and Manhattan and the bookends of PA Avenue in D.C.

The news is bad in California, to be sure. The state's budget deficit is catastrophic. Foreclosures occur at the speed of light. But there's more to California than that.

Though I'm in New Zealand, I email California friends and read the daily papers from SF and San Jose, my stomping grounds for three plus decades.

The panic in CA is minimal.
There's a ton, or at least a half ton, of news about start-ups and staggering new technologies; it almost feels like business as usual.
The world continues to turn in CA.
The same world that's stopped turning—according to the East Coast press, the Washington Post and the New York Times and CNN and MSNBC, all of which resemble an economics National Enquirer these days.

We're in for a tough slog. Could go on for years. Yet entrepreneurs and incipient entrepreneurs and university research scientists and any number of companies (Oracle comes to mind) continue to embrace the future—at warp speed, as they have for years. (Such full speed acts of creation, smaller in number to begin with, were effectively AWOL during the Great Depression.)

There seems to be grave concern but little panic in California—remember, about 40,000,000 of us live there, though you'd never know it from the press, which seems to consider Michigan the western boundary of the U.S.A. And there's significant, though not grave, concern and no discernable or incipient panic in New Zealand.

Yes, I think we're in for a tough, tough slog, and a long one at that. But the Panic-from-the-East may be overblown—and thence, to some extent, perhaps to some great extent, it has the makings of a self-fulfilling prophecy.

I wish Mr. Obama would come to Stanford or San Jose. I wish Chris Matthews would return for a while to his beat at the SF Examiner. I wish Lou Dobbs would take a Zen class in breathing.

A friend sent me a Peggy Noonan column from last week. Okay, she lives in the East. But she made her bones as a Reagan speech writer—Reagan is the guy, most will recall, whose sunny disposition per se squelched the panic of the eighties. (That, and, I'd remind you, a whopping deficit.) My "a friend," Bo Burlingham, longtime superstar and spirit of Inc. magazine (and a liberal's liberal), all but ordered me to cast my eyes upon the column's final paragraph. I offer it below as the last words of this post:

I end with a hunch that is not an unhappy one. Dynamism has been leached from our system for now, but not from the human brain or heart. Just as our political regeneration will happen locally, in counties and states that learn how to control themselves and demonstrate how to govern effectively in a time of limits, so will our economic regeneration. That will begin in someone's garage, somebody's kitchen, as it did in the case of Messrs. Jobs and Wozniak. The comeback will be from the ground up and will start with innovation. No one trusts big anymore. In the future everything will be local. That's where the magic will be. And no amount of pessimism will stop it once it starts.

(The picture above, from a beach in Abel Tasman Park, is a stingray on patrol. Below, NZ's signature fern.) 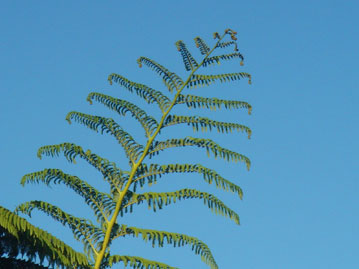