The Little BIG Things is, without any hint of hyperbole, the single best management book I've ever read." Warren Bennis 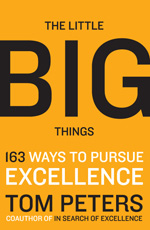 The Little BIG Things is a compendium of 163 ways to pursue excellence—with tips ranging from the blatantly obvious, "Show Up! (It's a Start.)" and "It's All About ... the Quality of the Workforce," to the wildly counterintuitive, "Boring Is Beautiful" and "Reward DNK (Do Not Know)," to the often repeated, "The Customer Is 'She.'" Begun as a repackaging of the Success Tips from our blog, this book became so much more as Tom worked and reworked its contents. Now, its main message is that EXCELLENCE is the result of many small tasks, all of which can be practiced and mastered.

You can purchase The Little BIG Things on iTunes as an ebook, an enhanced ebook, or you can find several apps combining video and text from the book. Visit Tom's Apple Books page to find them.

Listen to the Book

While Tom was reading The Little BIG Things for the audio edition, we made a collection of mp3 files, one item at a time. So, here they are, The Little BIG Things read by Tom. We've posted them a section at a time, and the book is now complete. Listen and get energized by Tom's enthusiastic rendering of his book!

We caught Tom on camera talking about many of the little BIG things included in the book. He talks about the importance of listening in the video below. For more videos in this series, visit our channel at YouTube.

Why not read a sample from the book? Choose from the Introduction, the Table of Contents, the section about Others, or the section on Enterprise. As a preview, we had sent section 1, Little, to recipients of our TP Times newsletter, and that's also available.

From Tom: "You'll find here the 'CliffsNotes' version of The Little BIG Things. In the interest of getting connected with as many people as possible, I've produced a series of 'Highlights' pdfs, which capture the 'BIG idea' in each of these 'little BIG things.' Missing are (1) the nuances and (2) 90 percent of the 'How to's' and the rationale for those 'How to's.' Eliminating the subtleties and cutting the action part is cutting the heart out of the book—nonetheless, I hope you will be titillated by what follows and moved, perhaps, to purchase the book; or in fact to use this version, distribute it, etc.—I want the ideas to circulate to the max." There are 48 sections and an introduction, each only a page or two, released over the course of several months.

People are talking about The Little BIG Things. Here's what they're saying:

Tom Peters is back with a terrific new book, The Herald, 17 January 2011

Tom Peters is not a BIG MOUTH & stuff you can learn from him, Rothacker Reviews, 29 September 2010

All success in an enterprise comes from valuing and engaging people, The Economic Times, 6 August 2010

Marketing Communication—It's a Little BIG Thing, It's Everything, Marketing Is Us, 14 April 2010

Enterprise* (*At Its Best), an excerpt from The Little BIG Things, ChangeThis.com, 7 April 2010

Can Tom Peters Help Us Find Excellence In An America That Needs To Re-Set Its Thinking? Huffington Post, 1 April 2010

163 Ways To Be More Awesome At Your Business, BusinessInsider.com, 16 March 2010

Memo to Tom Peters from the Department of Punctuation!!! Debbie Weil, 11 March 2010

Epigrams from the Original Modern Guru, by Stefan Stern at the Financial Times,
4 March 2010