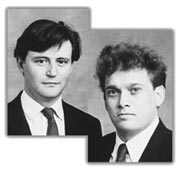 John and Adrian are true global citizens. John is the US Editor of the Economist and Adrian its Washington Correspondent. Their thinking and their journalistic remit roams widely. Their first book, The Witch Doctors, examined the managerial fascination with fads and fashions. In search of the reality behind the many myths surrounding globalization, their research took in the shanty towns of Brazil, the frozen Russian border, and the sex industry in the San Fernando Valley. We talk with them about their current book, A Future Perfect.

Gathering together the disparate strands of globalization has proved beyond many others. Is globalization simply too complex and chaotic to be fully understood?

JM: There is some truth in this. The things that push globalization are especially chaotic. Small things matter extraordinarily. But that does not mean that globalization is spinning out of control. Too often that is used by politicians as an excuse for doing nothing. Without political will, globalization runs into trouble.

Isn't globalization concentrating power in the hands of a global elite?

AW: We talk of the rise of a class of cosmocrats—perhaps 20 million people worldwide. This class is in the process of forming. It is made up of people who have similar global lifestyles and who possess the ideas, connections, and sheer chutzpah to master the international economy. It is a formally meritocratic class produced by Western education systems and companies. Yet, while there is a great feeling among Western educated people that their values are universal, their institutions are not very good at reaching out to the developing world. Western educational institutions and companies should be reaching out to recruit the talented people from developing countries.

JM: We expect the number of cosmocrats to approximately double by 2010. Within the Western world the numbers of people expected to be international is growing. The increase in technology will clearly also contribute. The next significant factor is that huge populous nations such as China, India, and Brazil will begin producing their own cosmocrats.

AW: Back to basics is not a bad slogan in the dot-com world and the same applies to the globalized world. If companies ignore basic principles they can be doomed. Even so, globalization is incredibly difficult to manage and, for most managers, it is usually more a source of fear than of excitement. First, global management has to be multicultural. Second, it involves mixing and matching skills and ideas from different parts of the world. What will drive companies to be global will be their ability to take the best skills and ideas from wherever they are in the world.

JM: If something doesn't make sense under national management it will be a disaster globally. Companies sometimes fail to export their domestic best practice—for example, Sony should have applied the same managerial standards in Hollywood as it did inside Japan. The more you look at how companies operate globally you see that, as Tom has said, being small and nimble works very well. Technology makes this readily available. One company which has handled globalization particularly well is GE. It has worked very hard at it. Yet, if you look around GE headquarters nearly all the people are American. Over the next twenty years an entire generation of cosmocrats will shape companies like GE. The change will be dramatic.

Is the business world generally in favor of globalization?

JM: It is a fragile coalition. In general most people are pro-Free Trade and globalization—but not in their specific industry.

You are particularly critical of Silicon Valley. How come?

JM: Let's be clear: Silicon Valley is the most innovative industrial center in the world. But it still has to be measured against the standards of industrial clusters. If you look at history, clusters often disappear. Some, like Hollywood, survive. Many of those that fail have also been unpleasant places—look at Detroit in the 1970s. There are industrial reasons why Silicon Valley will lose ground. The Valley has a fascination with cool ideas rather than products. And, over time, more suits will move in. Some elements of the social divide in Silicon Valley are not acknowledged. There are also infrastructure problems which will not be solved by the next cool idea.

AW: While Silicon Valley is good at creating wealth, it is less good at doing something with this wealth. One of the great aims of the book is to issue a wake-up call to techno-determinists who believe technology is doing everything.

Is globalization a force for good?

JM: It can be. Globalization exaggerates weaknesses and strengths. It hands power to individuals but it also increases inequality. While some people are left behind, millions more leap ahead. The winners hugely outnumber the losers. It can make bad government worse, but the onus should be on crafting better government, rather than blaming globalization. While it curtails some of the power of nation-states, they remain the fundamental unit of modern politics. Globalization is not destroying geography, merely enhancing it.

www.drudgereport.com
AW: A very easy way to get access to a lot of newspapers, columnists, and occasional scoops.

www.footballunlimited.co.uk
JM: For the soccer enthusiast. Its daily newsletter, the Fiver, is recommended.

The Victorian Internet by Tom Standage (Berkeley)
JM: I wish I'd read this before we wrote our book. It shows how completely optimistic people were about technology in the nineteenth century. Nothing is new.

The Ground Beneath Her Feet by Salman Rushdie (Picador)
JM: A great example of culture mixing.

Disgrace by JM Coetzee (Viking)
JM: To take my mind off globalization.

Bobos In Paradise by David Brooks (Simon & Schuster)
AW: Amusing take on the American version of the cosmocrats.

White Teeth by Zadie Smith (Random House)
AW: Great dialog and insight into what a culturally diverse place the UK is.

Interview by Stuart Crainer, May 2000
Stuart Crainer is a business writer and one of the founders of Suntop Media. His latest book is Generation Entrepreneur (with Des Dearlove).
© SUNTOP MEDIA 2000