Cool Friend John Moore from the Brand Autopsy blog went above and beyond in his review of Tom's new book, The Little BIG Things. John reviews a lot of books. He occasionally gets very creative as with the dramatic readings of Switch or Linchpin.

We found it quite remarkable that when he turned his attention to Tom's book, he decided to highlight particularly notable quotes by creating a slideshow in the exact style of the slides Tom uses in his presentations. John was so precise and accurate that two long time colleagues of Tom thought John had dug through Tom's slide presentations and pulled them out. Not the case. Check out the slideshow and see for yourself why we were fooled. More importantly, the slides are an excellent summary of the highlights of the book. Nice work, John!

Craigslist has changed the world—put about a zillion nails in the coffins of newspapers, among many other Richter 8.0+ things.
Craigslist has more traffic than Amazon or eBay.
(Though a private company, Craigslist has a projected market capitalization in the billions.)

There is more than one way to skin a cat—even a thoroughly modern cat.

Among other things, every (!!!) time you start a project, no matter how small, reach out to several S.W.P.—seriously weird people—for their views about what you are undertaking. Keep reaching until you find a couple of people who are so far out that they more or less speak gibberish.

It may indeed be gibberish, and probably is gibberish—but perhaps once or twice in a lifetime, it'll be someone and some approach that amounts to a blueprint for doing the work of 10,000 with 10, à la Craigslist vs. Amazon and eBay.

Never get seriously underway until you've surfaced a couple of ideas that score perfect 10s, or at least 8s, on the ... Berserk Scale.

At the least, you will have had your mind stretched, the best exercise regimen of all; at most, you may have taken a baby step toward inclusion in the history books.

NB: I've got two books beside me as I write this:

The idea of an all-weather channel and the idea of an all-sports channel were considered the fantasies of raving lunatics. It took both sets of "lunatics" forever to prove their points. Yet both properties achieved matchless popularity (user-addicts by the millions) and market values of several billion dollars each.

General Motors is in the midst of a highly visible project that will reinvent the brand, or provide more evidence that, "GM is a sleeping giant," as a former CEO of Toyota said. The Chevrolet Volt is an electric plug-in hybrid that was introduced at the Detroit Auto Show in 2007. Bob Lutz, the design champion of the Prowler, Viper, Ford Explorer, BMW 3 series, Pontiac Solstice, Saturn Sky, and others, is the brains and the brawn behind the project. This car is cool. Forty miles on a charge from that outlet in your garage, and then, if necessary, a small combustion engine kicks in to recharge the batteries on the road. Top speed of around 120 mph, 0 to 60 scores in at a respectable, albeit quiet, 8.5 seconds. The reclamation of the GM brand as an innovator and leader in automotive technology rests on their ability to meet two publicized goals: First, it has to meet the November 2010 launch goal. Secondly, GM must meet its stated intention of selling this vehicle at a price of $30,000.00. Toyota has said it will have a similar plug-in hybrid available for public sale by that November date. The race is on! As a former GM employee and current stockholder, I am of the opinion that GM cannot afford to lose this one. To win, GM has to reinvent its management and business model. I question whether this new aggressiveness can survive in a culture bloated with bureaucracy and powerful internal departmental silos. Already, they are hedging on the $30K target, though milestones seem to be on schedule for the launch date. Here are some things I would suggest, and I really want to hear from you all on what you think they might do.

END_OF_DOCUMENT_TOKEN_TO_BE_REPLACED

WOW! What a terrific question from Edge.org:

What have you changed your mind about? Why?

Harvard psychologist Daniel Gilbert: "In 2002, Jane Ebert and I discovered that people are generally happier with decisions when they can't undo them. When subjects in our experiments ... couldn't undo their decisions they tended to concentrate on the good features and ignore the bad. ... I had always believed that love causes marriage. But these experiments suggested to me that marriage could also cause love."

Sam Harris, author of The End of Faith: "Like many people, I once trusted in the wisdom of Nature...and thought that, with the advent of genetic engineering, we would be tinkering with life at our peril. I now believe ... the history of life on this planet has been one of merciless destruction and blind, lurching renewal ... Those that survive do so despite Her indifference ... There is nothing about natural selection that suggests our optimal design ... Mother Nature is not now, nor has she ever been, looking out for us."

Kevin Kelly, author of New Rules for the New Economy: "Much of what I believed about human nature, and the nature of knowledge, has been upended by the Wikipedia ... I knew from my own 20-year experience online that ... an aggregation of random contributions would be a total mess ... How wrong I was ... The reality of a working Wikipedia has made a type of communitarian socialism not only thinkable, but desirable ... When you grow up knowing rather than admitting that such a thing as the Wikipedia works; when it is obvious to you that open source software is better; when you are certain that sharing your photos and other data yields more than safeguarding them—then these assumptions will become a platform for a yet more radical embrace of the commonwealth ... Its mind-changing power is working subconsciously on the global millennial generation, providing them with an existence proof of a beneficial hive mind, and an appreciation for believing in the impossible."

OK. Truth-telling time. What have YOU changed your mind about?

Sure it's late, but here are a couple of suggestions: 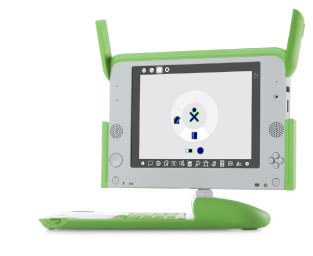 BoGo Light. About Two Billion people have no electric lights. Substitutes, such as kerosene, are dangerous and play havoc with the environment. Enter Mark Bent, inventor of a $25 solar-powered flashlight. BoGo is "Buy One, Get One." Go to BoGoLight.com, and for $25 plus shipping you get one—and he sends one to the relief group of your choice. You can choose pink or orange. Please choose pink!! Orange was the sole color, but men routinely stole them from women. Men are not so inclined to swipe the pink ones. In a tale reminiscent of the development of micro-lending, the guys use the lights to sit around and do nothing; women use the lights to teach each other to read, do family chores such as gather firewood, etc.

FYI, I am a participant in both programs, though I am not associated with either one other than in the role of Cheerleader.

"Foundation" is an intimidating word that brings to mind Bill Gates or Ross Perot. But how about Catalino Tapia? He came to the U.S. from Mexico 43 years ago, at age 20, with $6 to his name. He held a series of jobs, and eventually started his own gardening business. He owns his home in Redwood City, CA, south of San Francisco, and recently his son graduated from Berkeley's law school (Boalt Hall). In 2006, he started a non-profit corporation, Bay Area Gardeners Foundation. With a dozen immigrant gardeners on the board, the foundation this year awarded nine college scholarships @ $1,500 each.

Marvelous!
I guess you don't have to be Bill Gates, after all!
And you?

(The above story courtesy the San Francisco Chronicle, 10.15.07—I grabbed a copy last week on my way to Korea.)

Am I the only person who is frustrated at the wave of negativity in the UK media about the 2012 London Olympics? It has been almost sixty years since the UK hosted a Games, and even then the IOC asked London to host the 1948 games when the world was recovering from six years of carnage and in economic turmoil. Well, the celebrations of July 6, 2005, after the London bid beat Paris' by 54 votes to 50, have long since abated, and we now have general carping and scoring of political points about the eventual cost of staging the Games and who will have to pay. But what about the benefits?

If cleaning up and refurbishing one of London's biggest industrial wastelands and installing a world-class array of sports facilities with a supporting transport infrastructure isn't a Wow! Project, then I don't know what is. Then there is the challenge of the events themselves and the inspiration that having the Games here has already given to youngsters dreaming of their own future sporting prowess. It speaks to a level of ambition that seems to be sadly lacking in many of our public and private enterprises. I recall Tom Peters speaking in London about the Channel Tunnel being THE civil engineering project that he (as an ex civil engineer) would love to have directed. That project went a little over the original budget forecast, too, as I recall!

To transform our flagging businesses and run-down communities will take bold ambition, and a willingness to pitch, win, and deliver projects of vision and magnitude. At the end of the day, the only success criterion that really counts is "Was it Wow?" 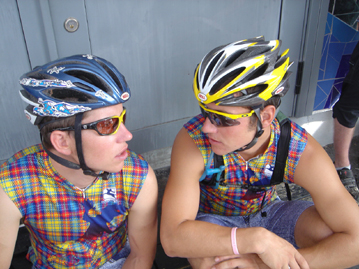 The excuse for our family vacation was Max and Ben's participation in SSWC06, the Single Speed World Championship bike race—in Stockholm this year. Max took a brilliant 10th among 200+ participants, including some pros. Ben, in his first race of this sort, netted a top-half finish among the group who actually finished the grueling course. Above are the two stalwarts minutes before the start. 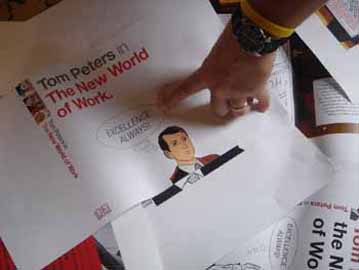 Didn't expect to write another book. 70 hyper-tailored presentations and the Blog are more or less enough. But our Erik Hansen who, along with Cathy Mosca, is co-major domo of the Blog, visited with my UK publisher, Dorling-Kindersley. Special Projects publisher Stephanie Jackson wants a book. So she and chief designer Peter Luff (design-are-us at DK) cooked up some ideas. Erik presented them to me last week, and I was 90 percent hooked—Blog stuff will be front and center with keen illustrations.

You know Erik from his posts and as architect of the Cool Friends interviews. But do you really know him? The picture of the hand, at his presentation, is Erik's. In a future Post I will reveal the rest of him!

Our friends at 800CEORead have put together a venture called inbubblewrap where they are currently offering free books—and other goodies—to people who sign up at their site. And today, five lucky folks have a chance to win a copy of Tom's beautifully designed Sixty as well as a bucketful of other books and paraphernalia. Cost? Your email. Value? Priceless, of course. Check it out.