The staff of Tom Peters Company in the UK sat down with Tom to talk about personal development. Tom spoke about what he calls "the one thing I've learned 'for sure'" in his decades-long career, "Whoever Tries the Most Stuff Wins." Start yourself on the road to personal development by watching the video that came out of the conversation: 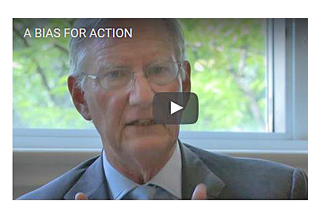 Don't miss the interview at McKinsey.com, "Tom Peters on leading the 21st Century." On the 50th Anniversary of the McKinsey Quarterly, they interviewed Tom, and the conversation basically covers his outlook on the next 50 years. Use the link above to find the online version of the interview, which includes several short video clips and a Twitter feed of the talk around what Tom had to say.

I have recently written a 172-page manuscript, inspired by several tweetstreams. Not sure whether or not it was a single tweet or something else that got me going, but get me going it did!

I am, in short, appalled by most of the "change management" literature. In a word, it's 99% (or so it feels) negative.

In a word: RUBBISH!

The change process need not be negative. Indeed, when it is, it is rarely or ever successful.

The issue and opportunity, briefly addressed here, is the recruitment and nurturing of ... ALLIES.

An old topic from me. Yet always new. That is, ripe for improvement or at least monitoring. Namely "A Bias For Action." The #1 of eight "Basics of Excellence" from In Search of Excellence in 1982. And even more important today as the pace of change accelerates. This is less about "ideas to implement" than about a cultural trait that must be instilled and assiduously maintained.

I frequently say, "I've only learned one thing 'for sure' in the 47 years since I started doing 'this stuff.'" (The 1966 staring point goes back to my U.S. Navy Seabee days in Vietnam.) The term "for sure" is meaningful; as a scientist by disposition, I don't believe as a matter of course in "for sures." So this exception is a big deal—to me.

And that one for-sure thing is ...

Or, to clarify ... Whoever Tries The Most Stuff Wins.

In Search of Excellence was constructed around "eight basics." And the first was "A Bias for Action." As we said then, and it's become more true over time as the pace of change accelerates: Big Business's #1 problem is "too much talk, too little do." To bring the In Search message up to date, I just came across an ad for an Economist conference. The conference title: "Redefining the Speed of Business: CAN YOUR BUSINESS FAIL FAST ENOUGH TO SUCCEED?" In fact, my WTTMSW has a fuller alternative: WTTMSASUTMSTFW. Whoever Tries The Most Stuff And Screws Up The Most Stuff The Fastest Wins.

A new short form ebook is now available thanks to our friends at New Word City. It's called Getting Stuff (That Matters) Done and it's all about execution. You certainly can't be Excellent if you're not getting anything done. So read the ebook and get started!

Attached is "Systems Have Their Place: SECOND Place." It is directly related to my remarks concerning the absolute necessity of "culture change" to address intractable hospital problems such as patient safety.

Herewith the paper's origin: This essay indirectly stems from the current American presidential primaries. Two candidates suggested that the Department of Defense's wasteful ways could be curbed by ordering the adoption of "6-sigma management." Having put in two years of Pentagon duty as a naval officer (1969-1970), I was struck by the hilarity of such a notion; I'd observed the "adoption" of miracle systems before in the DOD (PPBS/Program Planning and Budgeting System, the brainchild of SECDEF Robert McNamara), and watched their inevitable byproducts—more bureaucracy and more waste. Moreover, ideas like this, and the issues associated therewith, are near the heart of my last 35 years of professional work. Hence, with some outside urging, and with no political axe to grind on this score, I prepared this brief paper.

It's time for two new sections in The Little BIG Things Synopsis Series. The next two sections in The Little BIG Things: 163 Ways to Pursue Excellence are titled "Change" and "Special Section: Charlie Wilson's War." In Change, Tom proposes a few perhaps unexpected ways of thinking about how to make change. The Special Section presents lessons in getting things done learned from Charlie Wilson's War.

You can download free pdfs of those sections from The Little BIG Things Synopsis Series* by clicking below:

You can download a free pdf of this section from The Little BIG Things Synopsis Series* by clicking below:

It's time for two new sections in The Little BIG Things Synopsis Series. The next two sections in The Little BIG Things: 163 Ways to Pursue Excellence are titled "Special Section: The Recession 46" and "Self." The Special Section offers strategies for coping with the economic crisis. The "Self" section focuses on adjusting your attitude and working on your story, things that elevate your personal brand.

You can download free pdfs of those sections from The Little BIG Things Synopsis Series* by clicking below:
#7 Special Section: The Recession 46
#8 Self