Robert Kessler is the Communications Director at EcoHealth Alliance (EHA). EHA is an international nonprofit comprised of doctors and scientists who search for the origins of pandemics, influence public policy around the world to prevent them, and provide their science to industry in order to develop therapeutics to combat spread of disease.

Needless to say, Robert has had a busy year. We initially invited him to help us with a test run, but his professionalism, humor, and humanity inspired us. Robert Kessler contributes to what is a great culture at EHA, so we asked him: What does extreme humanism mean to you?

Dr. Linda Hill works at the Harvard Business School as the Wallace Brett Donham Professor of Business Administration and faculty chair of the Leadership Initiative. Regarded as a top expert on leadership and innovation, Hill co-wrote Collective Genius: The Art and Practice of Leading Innovation (Harvard Business Review Press 2014) and co-founded Paradox Strategies.

As a fellow Thinkers50 award winner, we’ve long admired Dr. Hill's work on innovation and leadership so we asked her, "What does Extreme Humanism mean to you?"

What does Extreme Humanism mean to you?

Seth Godin is an entrepreneur, best-selling author, and speaker. He has written 24 books about business and marketing—but that's not why we asked Seth this question. Seth and Tom have known each other for decades and not only respect the other's work, but are also good friends.

Tom's latest book, Excellence Now: Extreme Humanism, and first course, The Power of Excellence, have been seeing great success since their release on March 15th! Here are some terrific conversations Tom has had about them. Watch to hear straight from Tom why he thinks the Excellence Now campaign is crucial right now.

Excellence Now: It’s All About the Human Stuff with Tom Peter‪s‬, What's Next! with Tiffani Bova, 21 January, 2021

The Financial Times asked me to write about the $600 million settlement that McKinsey accepted as recompense for its disgraceful role, via Purdue Pharma, in potentially abetting the opioid crisis.

McKinsey’s work on opioid sales represents a new low:
My former consultancy demonstrates what is wrong with business school graduates

This month McKinsey agreed to pay nearly $600m to settle claims that its advice had exacerbated the deadly US opioid crisis.

One bit from my submitted draft, which I unequivocally approved, did not make the final cut. I suggested that I fervently believe that heads in a not small number should or should have rolled. I am a U.S. Navy (and Royal Navy) veteran, and believe the Captain and those in the direct chain of command should go down with the ship. I observed that in a case close at hand during my service in Vietnam in 1966-67.

I can present no hard evidence, but from a couple of conversations with people who are well informed, it is my understanding that headrolling has been minimal. Certainly the Managing Director should have been fired, one hopes with no accompanying benefits. Though I do not know modern McKinsey, the Office Manager and all those between him or her and the coal face should have been shown the door as well.

I am not a vindictive person, but this situation is so appalling that, I believe, the punishment should match the crime.

What is more worrying from my conversations is that the centerpiece of the internal response has apparently been to revise processes.

The issue is not a “process issue.” It is a culture and values and morals issue that runs to the core of the way McKinsey does business. It will in no way be solved with process change and a lecture or two. It requires deep reflection about “who we are and what we believe”—as human beings far more than “professionals.”. (In my angrier moments, of which there are many, I almost think McKinsey should consider shutting its doors and closing down.)

Such are my more pointed concerns largely not addressed in the original, far more analytic, article.

Check out these articles to keep up-to-date on all things Tom.

Fast Company's February 3rd article, A Personal Branding Expert Shares What it Takes to Build a Successful Reputation by Wendy Marx, remind us of Tom's five keys to help sharpen your image:

In this Loop North article by Howard Tullman, How To Walk Around The Office - Even If There Isn't One, Tullman reminds us that Tom's idea of Managing by Walking Around (MBWA) is just as important when your employees are working from home. 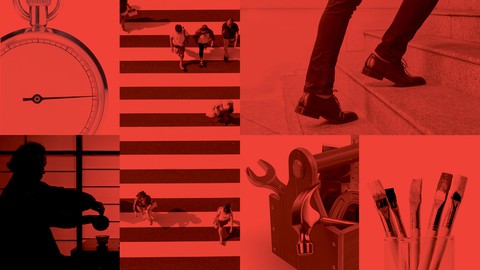 Six Essential Steps to Excellence is a preview into all six of the courses in our series: The Power of Excellence, People (Really) First, Innovation, Value-added Strategies, Leadership Excellence, and Leadership with Urgency. The course contains six of the most essential learning modules to infuse you with ideas and strategies you can use RIGHT NOW. We're living in very tumultuous times and finances are tight. If that’s the case for you, that’s why we created this free offering. If you’re able to invest in the paid courses, then you can use this to find out if it feels like the right tool for you and your organization. Either way, we hope that it leads you on a path to workplace Excellence!

You'll learn to create a culture of Excellence in your workplace, to master actionable skills, and to improve the reputation of your organization. All you need is a desire to improve your workplace and to become a better leader/manager.

More On Excellence: Now More Than Ever
This six-part training course, two years in the making, is based in part on Tom’s 2018 book, The Excellence Dividend. On top of the 99 videos, each emphasizing a Step to Excellence, there are actionable TTDNs (Things To Do Now) associated with each of the content pieces that you can customize to the needs of your organization. That's 99 Steps and more than 99 action items. Read more about all six courses here.

"What you are doing right now will be the hallmark of your entire career.”  That's what Tom is insisting about the critical nature of leadership in current conditions. These tumultuous times demand deep engagement, human connection, and, yes, EXCELLENCE. In response, Tom has started his Excellence Now Campaign, a trio of publications intended to be his final lessons in Excellence. Lessons which focus on these topics of surpassing importance; topics which are, in fact, more important now than ever.

Excellence Now: Extreme Humanism
In his upcoming book, Tom sets an even higher bar given the state of our very troubled and very fast moving world today. Tom will show how excellence that centers around the human being rather than the technology, that creates jobs rather than destroys them, that offers humanized services and products that bring no less than delight and joy to customers is achieved by day-to-day, hour-to-hour action. Pre-order for Kindle now.

Excellence: Now More Than Ever
This six-part training course, two years in the making, is based in part on Tom’s 2018 book, The Excellence Dividend. On top of the 99 videos, each emphasizing a Step to Excellence, there are actionable TTDNs (Things To Do Now) associated with each of the content pieces that you can customize to the needs of your organization. That's 99 Steps and more than 99 action items. Read more about all six courses here. The six courses are: 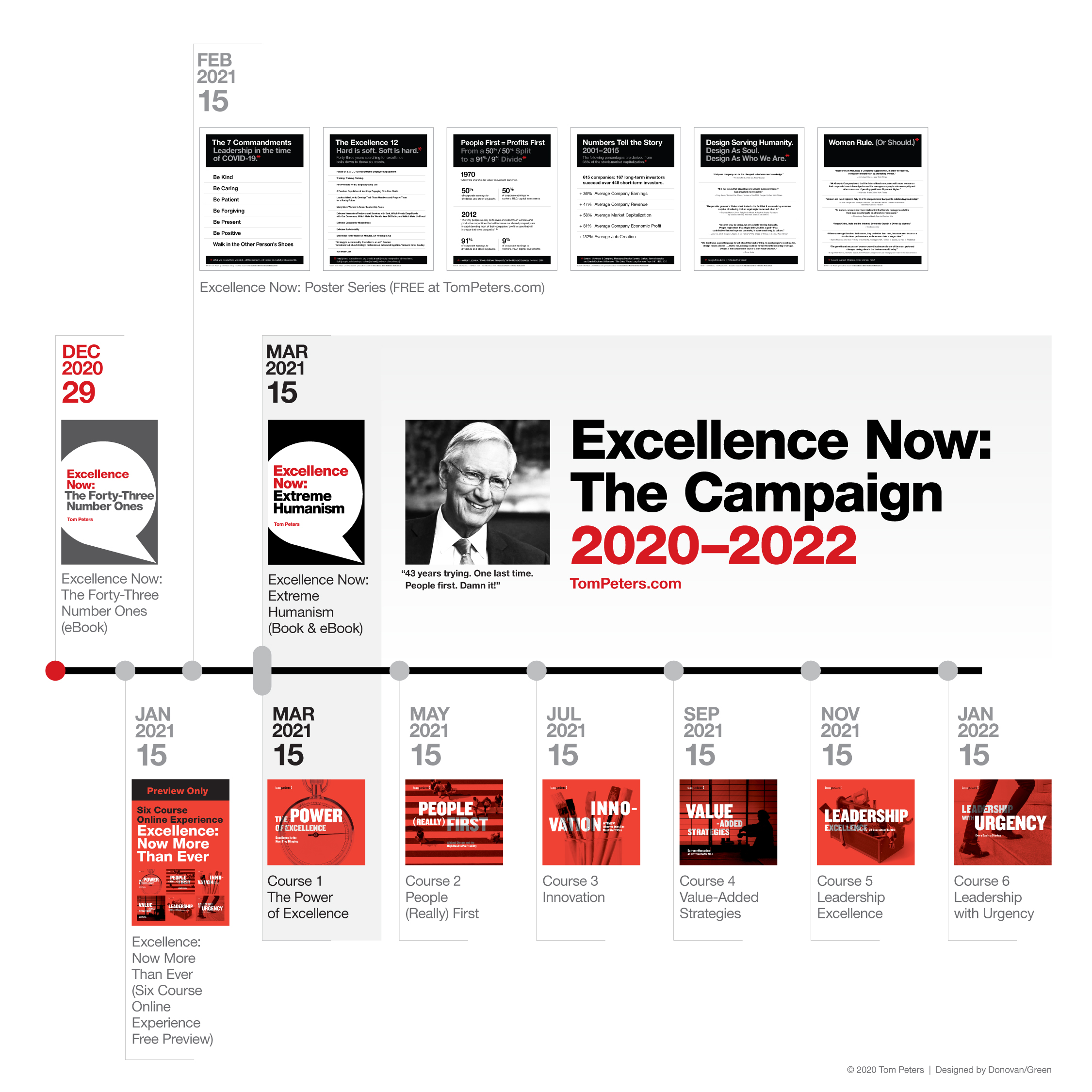 Below you will find the link to a paper I wrote in mid-2019 on maximizing shareholder value. As you can see from the title, I’m not keen on the idea . . . to put it mildly. And, yes, the title is loooong, but I wanted readers to know from the start exactly where I stand.

To our friends old and new:

Tom is launching a series of online courses on Udemy very (very) soon!

In the age of Covid-19, we’re committed to finding new ways to connect with you. This course series is one of the many things we’re doing to give you access to Tom’s teachings in new ways.

While it may be a while before we can meet in person, there’s no reason not to strengthen those relationships digitally.

For those of you who may not be able to afford it right now, we’ll be uploading snippets of the courses on our website at no cost at all.

Click this link to update your mailing preferences to include yourself in notifications about the new courses as they're released.

To learn more about what Tom will be teaching, read his letter to you below.