Brett Steenbarger, a contributor at Forbes, has taken a couple of Tom's tweets and expanded on them with great insight.

Tom tweeted, "Thinking ahead is great, but it becomes more than it is when when you sprinkle Holy Water and enshrine it as Vision." In response to reaction to this pronouncement, Tom went on to post, "Drucker said he'd never met a good leader who was 'charismatic.' I'd like to ban words like 'charismatic' and 'vision.'" (Read the tweetstream here.)

Steenbarger captured the essence of Tom's meaning and made it clearer to the rest of us in his article of July 26 on Forbes.com. We highly recommend his in-depth commentary on the subject of vision, "The Foresight of Leadership." He does an excellent job of supporting Tom's view that a vision may not be the key to success. Thank you, Brett!

My colleagues insist that not everybody is like me.
Not everybody dotes on PowerPoint.
Damn.

My book (not "book") is a long one.
It—almost literally—consists of "everything I've learned" about effective (EXCELLENT!) and ineffective (un-Excellent) organizations in the last 49 years.

I am not a total sadist.
When we release the book—very soon—you will indeed find THE WORKS as I call it—a single 1,918-slide set.
But you will also find 11 separate PowerPoint presentations which are the 11 chapters (not "chapters") of the book.

Of course the main thing is that I hope you read it and discuss it and use it—and steal like crazy from it at will.

For better or for worse, it's the (VERY) best I can do.
And since I "do" PowerPoint, that's the way it will come to you.

Enjoy.
Coming soon to various nooks and crannies, including, obviously, this site: tompeters.com.

(NB: Did you know I wrote my first blogpost 11 years ago next month—August 2004? It was the day after the youthful Illinois Senatorial candidate Barack Obama made his debut at the Democratic Convention in Boston, which resulted in the nomination of John Kerry. My Post #1 was not in any way political. I simply said that I give speeches for a living, and that was one helluva speech!! Like or dislike the President, I sure as heck got the "good speech" part right. Four years after the post, that precocious youngster was headed for the White House. And, to more or less repeat, like him or dislike him, he's in the White House. And you and I aren't.)

Oh yeah, one last thing.
I "do" PowerPoint.
And I also "do" ... EXCELLENCE.
So remember my mantra:

There are ideas I care about. And twitter is a great platform to have an ongoing discussion with (mostly) likeminded colleagues. Thousands upon thousands thereof.

It adds up to a lot of time.
Too much?
Perhaps.

BUT ... the transmission of ideas to a wide audience is how I have spent the last 38 years of my life—38 years ago, 1977, was when the McKinsey project that led to In Search of Excellence was launched.

Tom is proud to be included among the honorees on this list: The Top 50 Social Employee Advocacy Leaders (SEAL) on Twitter. We think it's a great accomplishment for a thinker born before the baby boomers to be in the forefront of an issue born with the Millennials.

Summary to a colleague of my recent 15-minute speech ("pep talk"):

Don't worry about '21st century leadership' (my assigned topic). If you are just decent to people, listen instead of talk, respect and encourage them, are religious about 'managing by wandering around,' most things will work out. And I said that, in the end, taking good care of people was the only thing worthy of a tombstone epitaph. My closing line, 'My ex-father-in-law carved tombstones. Nobody ever gets their net worth carved on their tombstone.'"

The 15-second version of the 15-minute talk, in the form of a tweet:

Do your MBWA and take good care of people. No one has their net worth on their tombstone."

Listening rules. Listening effectively is a "profession" as much as neurosurgery—though much more powerful than neurosurgery.

Listening rocks, rolls, and rules. Do your MBWA first thing this morning, last thing in the afternoon.

(Response tweet from Leslie Ann Howard: "When two people are talking, only one is communicating, the person who is listening.")

If you think "small talk" is small, then resign your leadership role this morning.

Friendships are the lubricant of effective leadership. So says Bill George. So said Dwight David Eisenhower.

Being pleasant is not antithetical to being tough-minded. In fact, though it's counterintuitive, they are handmaidens.

SIN OF "SEND." Edgy email? Hold it for 6 hours before sending.

Tom continues his round-the-world travels, speaking today at the World Business Forum 2015 in Hong Kong. It's the first time the event has visited that location.

Tom's halfway around the world from home once again. In Sydney, he's one of the speakers at the World Business Forum 2015, along with movie director Oliver Stone, former Fed chairman Ben Bernanke, and other excellent company. 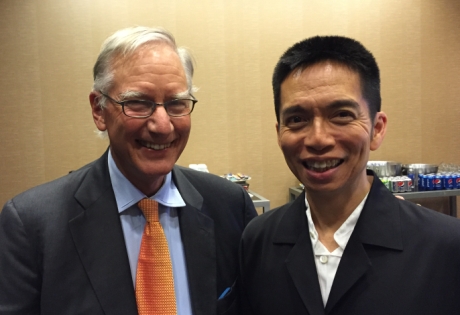 Tom bumped into a Cool Friend at the HOW Design Conference in Chicago. Not surprisingly, John Maeda was among the speakers, and he and Tom got a chance to have a bit of conversation. We interviewed Maeda in 2006, when he was part of the Simplicity Consortium at the MIT Media Lab. From there he progressed to being the president of RISD, and now he's a design partner at Kleiner Perkins.

As announced earlier, Tom was the Tuesday evening keynote speaker at Chicago's HOW Design Live Conference.

The HOW Design Conference will be presented May 4 through 8 in Chicago. Tom's on the schedule as the Tuesday evening keynote speaker, May 5th. Single-day tickets are available for the four-day event. 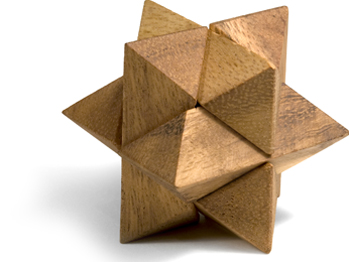