Bob Waterman died, at age 86, on January 2, 2022; among other things, the 2nd day of the year that marks the 40th anniversary of the 1982 publication of In Search of Excellence.

Bob and I co-created/co-authored In Search. We both thought we had done a pretty decent job, and the reception to the presentations of the book’s material had been uniformly heartening; but make no mistake, we were both staggered by the reception the book received and, for that matter, continues to receive. The only person more surprised than we were was our Harper & Row publisher, Ed Burlingame.

Bob and I were, on the one hand, cut from the same cloth. We were both trained as engineers, Bob at the Colorado School of Mines, me at Cornell. We both got MBAs from the Stanford Business School, and we both labored at McKinsey’s San Francisco office.

But we were also very different in ways that doubtless, in retrospect, drove our book’s success. I was noisy (orally and in print), profane, and opinionated. Bob was calm and thoughtful. Blending those differences was, upon reflection, what in the end made the book. After Bob had done a re-write of an early draft of the manuscript on his spanking new Apple II, my closest McKinsey friend, Alan Kennedy, was furious, and thought Bob had drained the spirit from the book. I was irritated, too; but I subsequently believe that the to-ing and fro-ing enabled the book to connect with the real business or non-business reader and leader—challenging her or him pretty directly, but not whacking her or him over the head with a splintery two-by-four.

Bob and I became close pals, and the Waterman family, starting with the wonderful Judy Waterman, became my second family during a rough patch in my personal life which coincided with the book’s birthing.

Bob and I never argued. At least in the normal usage of the word. We “argued” by editing intensely the most recent draft of the manuscript that one of us had handed over to the other.

A year before the book’s publication, I left McKinsey rather unceremoniously, having pushed some “strategy first-last-forever” power players too hard with my incessant “people first” ranting. But the writing process, amazingly, continued without a hitch. I even continued my presentations of the materials to McKinsey clients as the material was massaged and massaged some more.

Bob was a dear dear pal, his family was my family, and in some strange way the book reflected that rather perfectly. The idea of the book was to get beyond the sterile P&Ls and org charts, and get to the human heart of enterprise and its place in the community and the world. The data and our extensive research led us that way, but the true magic was arguably the quiet Tom & Bob Show that made the book what it was and is, and made it a dramatic departure from the bloodless depiction of business practices that were the norm in the 1977-1982 interval that marked the book’s birthing and road-testing.

I loved Bob dearly and miss him to an unimaginable degree. Rest in peace, brother.

For more on Bob Waterman, check out this Cool Friend interview with him. 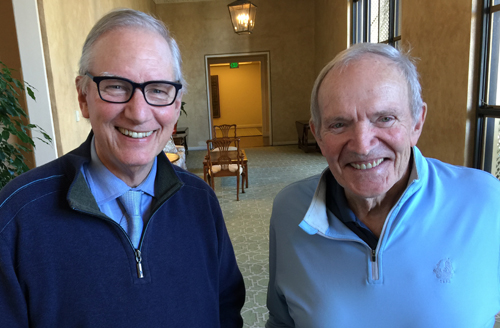