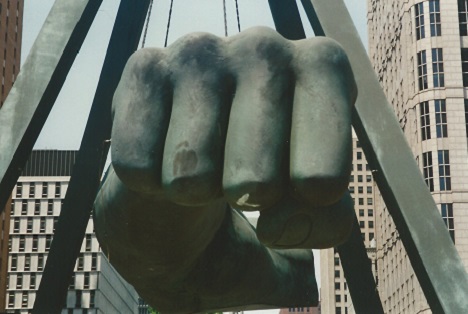 Did you see the recent article, "The Post-Post-Apocolyptic Detroit"? Before I met Tom Peters, I lived in Detroit. My husband had an idyllic, cookie-cutter suburban '60s upbringing there with a family full of auto workers. All his grandparents were immigrants, happy to see their children thrive in post-WWII Detroit. He spent the '80s in downtown Detroit, in college and working at the Stroh Brewery. Detroit was already in decline when I arrived in the '90s.

What I found was a population baffled by their misfortune. Why was manufacturing more cars not the solution to their economic woes? Assembling cars had created a healthy middle class and glamorous city. But the industry changed. This community of builders, in love with the cars they built, were no longer able to prosper. Ruin, on a massive scale, ensued.

For an overview of the desolation, take author James Howard Kunstler's Google Street Views tour of the Detroit cityscape.

Detroit's decline has lasted for so long that its reputation is rough, scarred, brutal. As a young, white woman in the '90s I was advised by many not to go downtown alone. Kunstler states while visiting Detroit he had to stay in another country for safety (Windsor, Ontario, across the river). That was not my experience. I found boundless creativity. In some of the most dangerous areas, there were community art fairs, neighborhood art projects (most notably the Heidelberg Project, shown below), and a vibrant music scene. That is not to say that Detroit is a safe place. It's not. But those who have stayed either don't have the ability to leave or have been brave enough to believe that things will improve. Knowing Detroiters as I do, I'd say they will not go down without a fight. 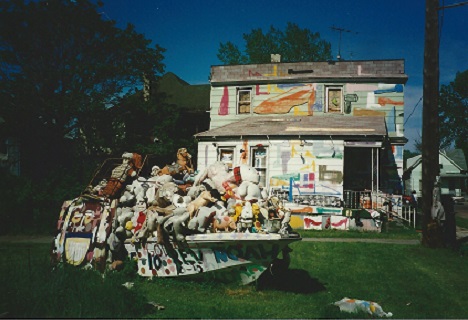 The "Post-Post-Apocolyptic Detroit" article features the stories of some of those who are brave enough to not only stay, but invest heavily in the future of this once-great city. Dan Gilbert, billionaire owner of Quicken Loans, seems to be investing the most.

Detroit is his mission; he has gone all-in. He has brought 12,500 employees with him to downtown, ... is funding the construction of a light-rail system ... formed a start-up incubator called Bizdom and a venture-capital firm ... He told me: "Here, man, oh, man, it's a dream. Anything can be created in Detroit."

Gilbert, a Detroiter by birth and an entrepreneur by nature, happened upon some very good advice early in his career:

After starting his first company, Rock Financial, he fell under the sway of the Thomas J. Peters business tome In Search of Excellence and became fixated on the idea of creating a positive corporate culture.*

Longtime readers of Tom's work recognize that profit isn't always the result of greed, his favorite equation being, "Kindness=Repeat Business=Profit." Dan Gilbert is trying to "enrich a city and himself at the same time," believing that you can "do well by doing good."

I, for one, hope that Dan and Tom are right. As the article points out,

If the scale of Detroit's failure is unprecedented, then so (the local reasoning goes) is the scale of its opportunity.

Whether the locals are right or not about the size of the opportunity and its likelihood of success, the more who act on Tom's equation, the better off Detroit will be.

*[Postscript: Upon reading Dan Gilbert's comment, Tom wrote, "I am flattered beyond measure and never cease to be amazed by commentary like this. Makes a dent in the cumulative weariness from millions of air miles."]