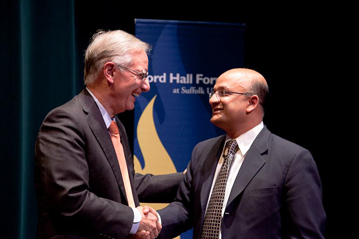 Tom is featured at The Ford Hall Forum in Boston tonight. He is engaging in a dialogue titled "Business Ethics and Other Oxymorons." He will be having a dialogue with Nitin Nohria, Dean of the Harvard Business School; the discussion will be moderated by Donna Carpenter, founder of New Word City and, among other things, publisher of Tom's eBooks

Tom calls what follows, "My 'cheat sheet' for the discussion." Tom adds, "As most know, I am a fierce critic of B-schools. Yet Dean Nohria is making enormous changes, for the better as I see it, at HBS. I'd call the Boston discussion a 'debate,' except Nitin and I are in virtually complete agreement about the role of business in society—and the broad obligations of business leaders. Incidentally, Dean Nohria comes out of the business sub-discipline typically called 'organization behavior'—so do I. Praise the Lord, for once, unlike at my alma mater, Stanford, we have a B-school dean who's not one more bloody economist."

"[A corporation] can be formed to conduct or promote any lawful business or purpose"—from Delaware corporate code, in which there is no mandate for shareholder primacy.

"[Courts] uniformly refuse to actually impose legal sanctions on directors or executives for failing to pursue one purpose over another. In particular, courts refuse to hold directors of public corporations legally accountable for failing to maximize shareholder wealth."

"What about shareholders' rights to sue corporate officers and directors for breach of fiduciary duty if they fail to maximize shareholder wealth? Such a right turns out to be illusory. Executives and directors' duty of loyalty to the corporation bars them from using their corporate positions to enrich themselves at the firm's expense, but unconflicted directors remain legally free to pursue almost any other goal."

"From a legal perspective, shareholders do not, and cannot, own corporations. Corporations are independent legal entities that own themselves, just as human beings own themselves. ... Shareholders own shares of stock. A share of stock is simply a contract between the shareholder and the corporation, a contract that gives the shareholder very limited rights under limited circumstances. In this sense, stockholders are no different from bondholders, suppliers, and employees. All have contractual relationships with the corporate entity. None 'owns' the company itself."

"Managers have lost dignity over the past decade in the face of widespread institutional breakdown of trust and self-policing in business. To regain society's trust, we believe that business leaders must embrace a way of looking at their role that goes beyond their responsibility to the shareholders to include a civic and personal commitment to their duty as institutional custodians. In other words, it is time that management became a profession."—Rakesh Khurana & Nitin Nohria, "It's Time To Make Management a True Profession," Harvard Business Review/10.08

"The hottest places in hell are reserved for those who in a period of moral crisis maintain their neutrality."—JFK

From John Bogle, Enough. The Measures of Money, Business, and Life (Bogle is founder of the Vanguard Mutual Fund Group):

"At a party given by a billionaire on Shelter Island, Kurt Vonnegut informs his pal, Joseph Heller, that their host, a hedge fund manager, had made more money in a single day than Heller had earned from his wildly popular novel Catch-22 over its whole history. Heller responds, 'Yes, but I have something he will never have ... enough.'" (extracted from the New Yorker)

TP comment: I loved Jack's book and was honored to have been asked to write the foreword to the paperback edition.

"For too long, the economics profession has minimized the critical role of cooperation in economic activity. Emphasis on the individual has risen above all else, and overshadowed the profound ways we depend on each other. ... If we ignore the important ways people cooperate to create wealth, we miss the most valuable source of wealth creation imaginable. ... By appreciating integrity as an asset that is valuable, companies can learn how to invest in it and create wealth."—Anna Bernasek, The Economics of Integrity: From Dairy Farmers to Toyota, How Wealth Is Built on Trust & What That Means for Our Future

"In an era of structured finance, nano-technology, and complex business models, Anna Bernasek's timely book reminds us that the economy runs on something much more simple: trust."—Review of The Economics of Integrity by Dan Gross, author of Dumb Money: How Our Greatest Financial Minds Bankrupted the Nation

"It is not enough for an agency to be respected for its professional competence. Indeed, there isn't much to choose between the competence of big agencies. What so often makes the difference is the character of the men and women who represent the agency at the top level, with clients and the business community. If they are respected as admirable people, the agency gets business—whether from present clients or prospective ones."—David Ogilvy

"I can't tell you how many times we passed up hotshots for guys we thought were better people ... and watched our guys do a lot better than the big names, not just in the classroom, but on the field—and, naturally, after they graduated, too. Again and again, the blue chips faded out, and our little up-and-comers clawed their way to all-conference and All-America teams."—Bo Schembechler (and John Bacon), "Recruit for Character," Bo's Lasting Lessons (Schlemberger was the legendary college football coach at the University of Michigan)

To develop and manage talent;
to apply that talent,
throughout the world,
for the benefit of clients;
to do so in partnership;
to do so with profit.

Anna Bernasek, The Economics of Integrity: From Dairy Farmers to Toyota, How Wealth Is Built on Trust & What That Means for Our Future

Francis Fukuyama, Trust: The Social Virtues and the Creation of Prosperity

Jack Beatty, Age of Betrayal: The Triumph of Money in America

Martha Nussbaum, Not For Profit: Why Democracy Needs the Humanities

Hanna Rosin, The End of Men: and the Rise of Women