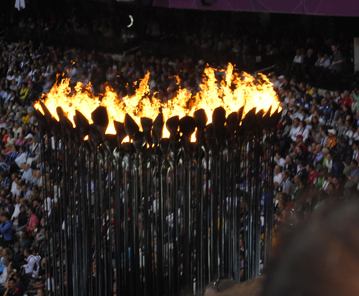 Now that the first Olympic 2012 Party in London is over (Paralympics starts on 29th August), we Brits are all asking ourselves whether we are going to get the legacy we had hoped for. It seems to me that there is a great deal too much focus on whether we can anticipate any profits from our investment. Here are just a few examples of what I think we will gain from it:

1. Looking at the tangibles we are inheriting, we have paid a high price for the regeneration of the area where the new Olympic park was built, but a superb job has been done. A previously derelict and neglected area has been transformed with iconic venues, extensive parkland, and accommodation that will become 2,800 new homes for local people.

There is still debate about whether the athletics stadium will become a white elephant, as we are still arguing about who will take it over after the Games, but the velodrome and aquatic centre look likely to become fabulous resources for everyone to enjoy.

2. A second aspect of the legacy must be the image of the UK that the world got to see. Despite aspersions being cast about whether we were ready for the Games, everything went to plan, finished early, and kept within budget (albeit revised upwards).

We did get a little edgy when members of our military were called in at the last minute to substitute for the shortfall of security recruits, but it turned out to be a real asset to have those guys around the park. They certainly made me feel more secure.

Even the predictions of doom and gloom around traffic chaos came to nothing. Maybe we were nudged into lower expectations, or persuaded to behave differently, but the much-heralded gridlock never materialised.

3. The Opening and Closing Ceremonies were a chance to showcase British character and talents. I've seen them variously described as marvellous, ambitious, and slightly bonkers, but then, I can't think of better words to describe our nation. I thought the most magical aspect was Thomas Heatherwick's beautiful Olympic Flame with its 204 copper petals all coming together to form a united cauldron of light. What a brilliant combination of function and beauty it was! Just like the best of British innovation over the years.

4. And what of the people of the UK—how did we acquit ourselves? We got a sense of the latent enthusiasm that was about to explode across the country with the Torch Relay. This covered 8,000 miles across the UK over the 70 days before the Games started, involving 8,000 individuals as Torch Bearers, and an estimated audience of 13 million spectators. It was a magnificent welcome to London for the Games. By the time the various road races got going, the crowds had got into the swing of turning up and cheering, and how they cheered!

The 80,000 volunteers that were recruited as so called Games Makers have rightly received universal acclaim as representatives of this country. As exemplars of engagement and selfless service, they came to embody the spirit of the Games. How impressive is it that we are capable of rallying a crowd of keen and willing contributors when there is a cause that matters to them. There must be something more we can do with that latent energy in future.

5. Finally, the motto of the Games was "Inspire A Generation," and it's unimaginable to me that we won't achieve this. There were stellar performances from so many dedicated Olympians; Michael Phelps in the swimming, Mo Farah in the long distance running, Usain Bolt in the sprinting, the list goes on and on. Across 26 completely different sports, athletes excelled themselves and showed what can be done by adding pure, hard graft to their talent. The team of athletes representing Great Britain and Northern Ireland outclassed themselves, and smashed their own medals target of 48, winning 65 in the end. I know we had the home advantage, but if that means we get a new generation with sporting ambitions ignited, that will indeed be a legacy to treasure.

So what of those who complain about the bottom line? It has cost a fortune, they say, and so far, no one can make the financial case for the Games. In fact, some say it has cost lost revenue. But for me that misses the point. We in TPC define Excellence as being a combination of systems plus passion, tangibles, and intangibles. My money is on the intangibles having a massive impact on our country; confidence, ambition, community spirit and optimism may all be hard to measure, but we've shown we can use them to good effect to stage these Olympics. Let's hang onto them and use them to build a stronger country for the future.