I was asked to write a roughly 1K-word précis of the 7-S/McKinsey 7-S Model, of which I was a co-inventor. As far as I can tell, this is the first such history of the well-known organization effectiveness diagnostic.

Herewith (and my apologies for the wordiness):

In 2008 in a participant document accompanying a seminar in Dubai, event speaker and former McKinsey & Co. Managing Director Rajat Gupta said in response to an interviewer's question: "The science of management continues to develop as scholars and global business leaders refine their approaches to organizing their enterprises to ensure both profitability and sustainability. There is surely no 'one size fits all' solution that can guarantee success in business. However, among the array of techniques and theories that can help strengthen business, I have always found that the 7-S framework offers a sound approach to combining all of the essential factors that sustain strong organizations: strategy, systems, structure, skills, style, and staff—all united by shared values. The 7-S framework remains one of the enduring elements of diligent, focused business management."

Gupta's rather strong comment came 28 years after Business Horizons, in its June 1980 issue, formally birthed the 7-Ss in an article by Bob Waterman, myself, and Julien Phillips titled: "Structure Is Not Organization."

And the Business Horizons article, in turn, came three years after I, fresh from receiving my Ph.D. in Organization Behavior at the Stanford business school (completed while on leave from McKinsey), was summoned to the firm's New York office and handed a fascinating assignment.

Relatively new McKinsey Managing Director Ron Daniel was launching a priority effort to renew McKinsey's intellectual capital—though that term did not exist at the time. (It was more or less called "R&D.") McKinsey's fabled advisors to top management were under an assault of ideas from Bruce Henderson's upstart Boston Consulting Group. And Daniel was determined to respond with vigor.

A major project on business strategy (the hottest of topics in 1977) had its home port in New York. But Daniel, from his own client work, was bedeviled by the frequency with which clever strategies failed to be implemented effectively. Though not a partner, I was asked to look at "organization effectiveness" and "implementation issues" in an inconsequential offshoot project nested in McKinsey's rather offbeat San Francisco office.(There was a third project, on "operations," run out of the Cleveland office.)

I should note that McKinsey's arsenal mostly consisted of "strategy" and, secondarily, "structure." All that was not to be cured with a scintillating strategic plan was to be dealt with by re-arranging the boxes on the formal organization chart. I exaggerate, of course—but not by much.

I finished a tour in the U.S. Navy in 1970 and went off to Stanford to pursue an MBA and eventually Ph.D. In neither of those pursuits was a page of Peter Drucker assigned. Instead I fell under the sway of the likes of Jim March (at Stanford), Herb Simon (March's partner and subsequent Nobel laureate in economics), and Karl Weick (then at the University of Michigan). Simon's Nobel stemmed from work on "bounded rationality" and its close kin, "satisficing"—the characteristic organizational pursuit of "satisfactory" rather than "optimal" decisions. March went much further, giving us such formulations as the "technology of foolishness" and "garbage can" models of organization, featuring, for example, solutions (pre-dispositions) wandering about organizations in random pursuit of problems to solve.

All of which is to say that I was attuned to an examination of organization effectiveness and implementation that went far beyond the mechanical manipulation of "charts and boxes."

I began my work with a grand tour of McKinsey offices world wide and business schools from inside and outside the USA. At home I visited with the likes of Professor Simon at Carnegie Mellon and, in Norway and Sweden, various researchers examining work group effectiveness—e.g., the Volvo crowd in Sweden and Einar Thorsrud in Oslo, running work group/self-management experiments on supertankers!

Upon returning, I pondered my findings and began tentative presentations around McKinsey. In a 1978 article in Organization Dynamics, "Symbols, Patterns and Settings," the first public expression of these ideas, I discussed unconventional change levers, influenced mightily by Jim March, such as the leader's allocation of time per se as a principal "power tool."

Progress of sorts followed, but it was a slow crawl until Bob Waterman was assigned as my putative boss. Bob, whose principal avocation was and is painting, had broad tastes and an inquiring mind—e.g., he became mesmerized by Karl Weick's work in a flash. More important, he was a damn good consultant—and wanted our work to be constructed in a way that would help the average McKinsey-ite take a shine to issues of organization effectiveness. (Which was, after all, the point of the exercise.)

Bob was great friends with Tony Athos, a professor at the Harvard Business School—and known worldwide as a master teacher. He enlisted Tony to help us turn our ramblings into something "crisp" (a favored McKinsey term) and memorable and "user friendly," as we say these days.

At a two-day séance in San Francisco, Bob and Tony and I, and Tony's cohort Richard Pascale, arrived, more or less full-blown, at the "7-S framework." (See immediately below.) The only, though significant, alteration became Tony's beloved "superordinate goals" morphing into "shared values." Tony was insistent that, corny as it appeared to be, we develop an alliterative model—find stuff that began with "Ss" in this case. In retrospect, it was a move of near genius. In my opinion, without the alliteration, which I initially found juvenile, the concept would not have been the sort being touted by Mr. Gupta almost 30 years later. 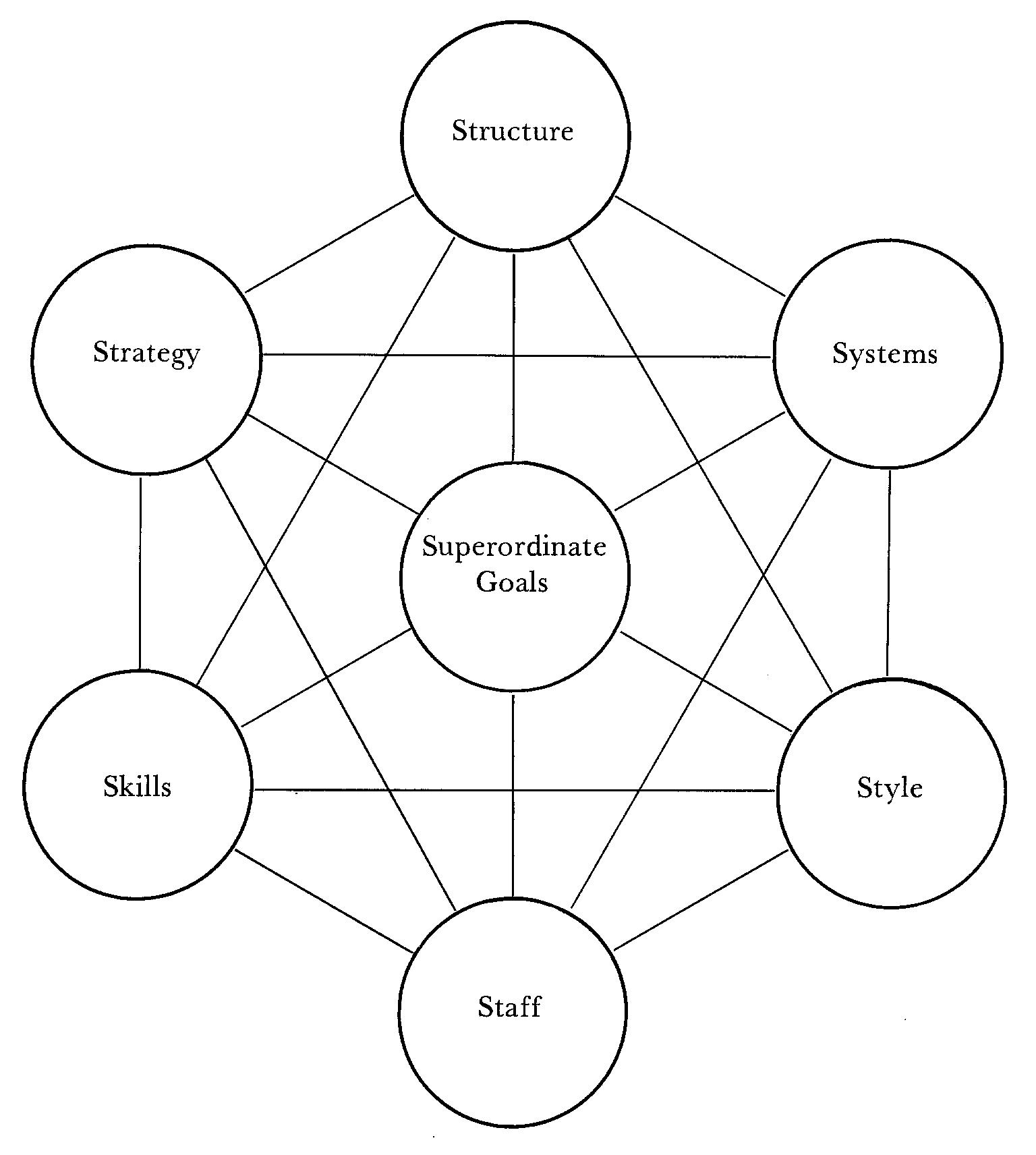 The shape of the "model" was also of monumental importance. It suggested that all seven forces needed to somehow be aligned if the organization was going to move forward vigorously—this was the "breakthrough" (a word I normally despise) that directly addressed Ron Daniel's initial concerns that had motivated the project. As we put it in the 1980 Business Horizons article, "At its most powerful and complex, the framework forces us to concentrate on interactions and fit. The real energy required to re-direct an institution comes when all the variables in the model are aligned."

Whether or not it was at the aforementioned séance, the other seminal idea—that there were "Soft Ss" as well as "Hard Ss"—emerged as well and lasts to this day. I continue to say, over 30 years later, that the power of the 7-Ss and In Search of Excellence (1982) and my subsequent work can best be captured in six words: "Hard is soft. Soft is hard." That is, it's the plans and the numbers that are often "soft" (e.g., the sky-high soundness scores that the ratings agencies gave packages of dubious mortgages). And the people ("staff") and shared values ("corporate culture") and skills ("core competencies" these days) which are truly "hard"—that is, the bedrock upon which the adaptive and enduring enterprise is built. To state the obvious, we very much included the "Hard Ss" (Strategy, Structure, Systems) in our framework, then added the "Soft Ss" (Style, Staff, Skills, Shared values—or Superordinate goal); and insisted that there was no precedence among them. Deal with all seven or accept the consequences—likely less than effective implementation of any project or program or increase in overall organization performance.

As mentioned at the outset, the coming out party was the June 1980 Business Horizons article. Then Athos and Pascale subsequently used the model in their popular The Art of Japanese Management (1981), and Bob and I included it in In Search of Excellence (1982).

At one point there was a movement to oust me from my humble office when an Op ed I wrote appeared in the Wall Street Journal in June 1980, emphasizing the primacy (yes, I dared use "primacy") of the "Soft Ss." (Bob W saved me, as he seemed so often to have to do.) On the other hand, my favorite certification of our approach came almost 20 years later from the ultimate "Hard S guy," McKinsey alum Lou Gerstner, in Who Says Elephants Can't Dance, summarizing his IBM turnaround effort: "If I could have chosen not to tackle the IBM culture head-on, I probably wouldn't have. My bias coming in was toward strategy, analysis and measurement. In comparison, changing the attitude and behaviors of hundreds of thousands of people is very, very hard. [Yet] I came to see in my time at IBM that culture isn't just one aspect of the game—it is the game [my emphasis]."

While the "Soft S" emphasis has been my life's work, I admit to astonishment when coming across a quote like the one from Rajat Gupta that opened this paper—suggesting three decades of staying power for our little model. I guess Tony Athos was right about the power of alliteration!

Note to readers: For the best explication of the 7-Ss, the 1980 Business Horizons article remains a peerless source.