In the end it was, to be precise, Harry Burn's mother who made all the difference. A suffragette, she wrote to her son, age 24 and Tennessee's youngest legislator, saying, "Don't forget to be a good boy and help Mrs. Catt ..." He did as his mother bid, tipped the scales on a 49-47 vote, and brought, effectively, to an end a struggle that in its most open form had lasted 72 years, 1 month, and 7 days, and compassed 909 distinct political campaigns.* With Mrs. Burn's urging and Harry's courageous vote on 18 August 1920, 90 years ago today, Tennessee became the 36th state to ratify the 19th Amendment to the Constitution of the United States of America, and some 26 million American women were franchised in one fell swoop.

(*The generally agreed upon starting point was a luncheon, hosted by Elizabeth Cady Stanton, on July 13, 1848 at Seneca Falls, New York.)

While I wish here to do no more than note and cheer this monumental anniversary, I will nonetheless add a nod to one of my Great American Heroes—the aforesaid Elizabeth Cady Stanton, clearly, to my mind, the most important suffragette. Some words about Ms. Stanton should inspire us all. From Elisabeth Griffith, In Her Own Right: The Life of Elizabeth Cady Stanton:

"She had survived her husband, outlived most of her enemies, and exhausted her allies. Her mind remained alert, her mood optimistic, and her manner combative." [Observation on the occasion of ECS 80TH birthday celebration, attended by 6,000 people.]

Would that "they" would say the same of you or me in pursuit of some mighty and honorable dream.

Below: Yours truly at a 2007 costume party, dressed as the heroic Elizabeth Cady Stanton. 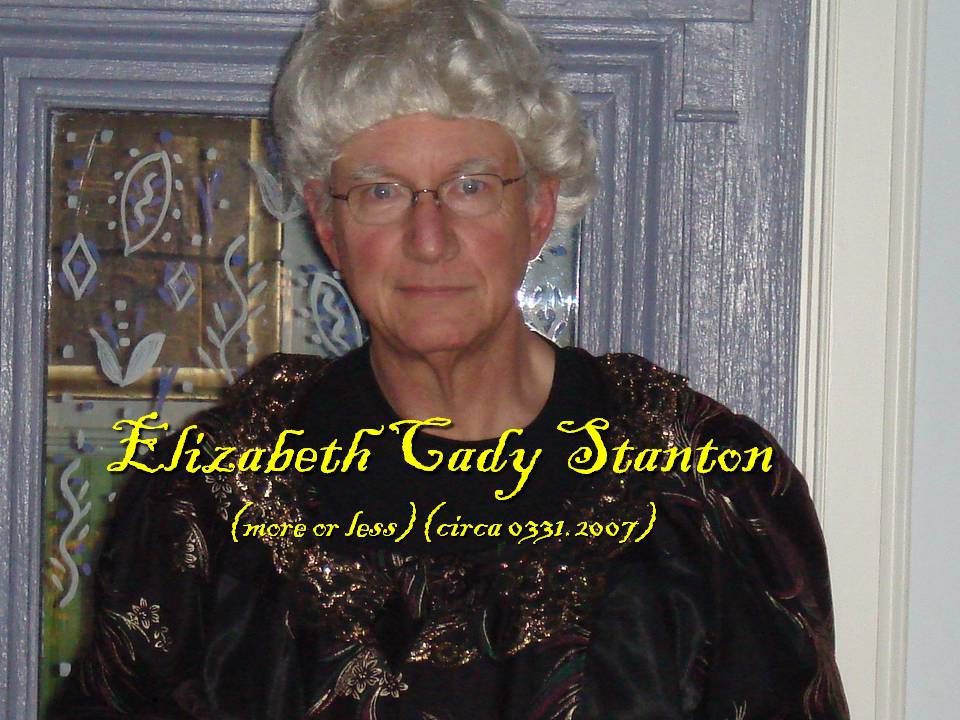