"All told, girls in India from one to five years of age are 50 percent more likely to die than boys the same age. The best estimate is that a little Indian girl dies from discrimination every four minutes."

Larry Summers (during his World Bank days): "Investment in girls' education may well be the highest-return investment available in the developing world."

Bernard Kouchner, founder of Doctors Without Borders: "Progress is achieved through women."

N'yet. Despite the Economist's cheery cover story, we've got a long way to go on women's issues worldwide. To get the story you can do no better than to read Pulitzer Prize winners Nicholas Kristof and Sheryl WuDunn's Half the Sky: Turning Oppression Into Opportunity for Women Worldwide. (All of the quotes above come from Half the Sky.) If this book doesn't "get to you," I can't imagine what would. The stats and stories are nothing short of astounding. As the title suggests, there is good news to accompany the bad—that is, examples of stuff that works. The journalists acknowledge that they are on a mission. The last chapter is titled "What You Can Do: Four Steps You Can Take in the Next Ten Minutes."

I cannot recommend this book highly enough—and, likewise, I recommend that you do consider becoming part of the solution. Despite the staggering size of the problem, you and I can help. Or, rather, how could we choose not to help?

[Below, fall apples, past prime.] 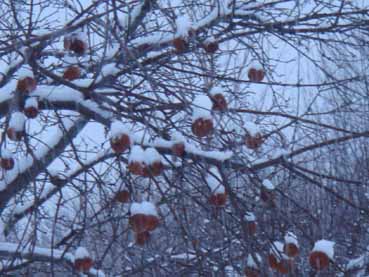