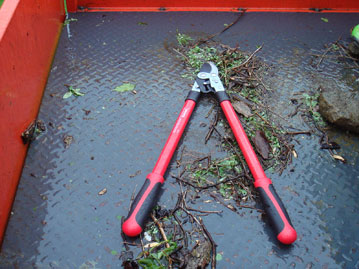 I have some fear that you'll read this and accuse me of playing "holier than thou"—the good news is that I know you'll let me know if that's the case.

I went to town earlier today to do some errands—including, yes, getting yet another brushcutting tool.

On the way, I was delayed by a crew doing some roadside tree trimming. One lane of VT Route 30 was closed—and there was, naturally, a Flagman at each end of the work area.

As is my habit ("Tom being Tom" is Susan's term for it), I waved to the flagman—not some big full-body "Hiya," just a little flick of the wrist. It ain't a great job, and a dollop of recognition can't hurt—right?

The guy on the front end waved back—a similar flick of the wrist, and perhaps a little nod. But as I approached the other end, I almost cringed. The Flagman there had as sour-grim an expression as I've seen in a long time. Not aggressively, attack-dog sour, just sour-sour. (Presumably you know what I mean.) I waved anyway, but as expected received no response whatsoever.

Maybe Flagman #2 was fired from a two-hundred-thou-a-year job at Lehman. Maybe Wal*Mart laid him off. Maybe his wife is pissed off at him. Maybe he has a nasty head cold. Any of those things is possible, or a hundred others—plus the job's not exactly a major career step.

Or is it?
(More accurately, could it be?)

I use a lot of quotes in my speeches; but the fact is that I commit very few to memory. But one that is etched indelibly into my synapses comes from Dr. Martin Luther King Jr.:

I'm sure there are multiple interpretations of this, and for awhile I had a touch of trouble with the quote: Did it mean that our street sweeper should aspire to no more than street sweeping? I decided not necessarily. To my mind, the quote means that whatever you are doing for whatever reason can be (ought to be, per Dr. King) turned to a Work of High Art and Fullblown Commitment.

I remember, on a visit to Rome at Easter a couple of years ago, racing at one point to catch a glimpse of a world-famous (!!-true) cop who stood in the center of a mid-city roundabout directing traffic with the same style-vigor-artistry with which Leonard Bernstein conducted a symphony orchestra or John Madden coached from the football sidelines.

It's a truism, as I see it, that a Flagman's job, per Dr. King and our Grand Roman Traffic-circle Cop, could indeed be turned into High Art. Or at least the work could be performed with a positive-vigorous-engaged attitude.

My sour Flagman made me sad—mostly for him, but it also put a wee dent in my day. These are troubled economic times. Some readers are doubtless doing something "less" than they were a year ago—perhaps both their ego and wallet have been dented.

Maybe tough times make it tough to sport a grin. But tough times are especially good times (!!!) to Stand Out for your Spirit & Determination & Engagement & Comradeship.

Flagman, 7-11 clerk, or bank teller, there's always a promotion right around the corner—or at least something close to a short-term employment guarantee—if you live by the words of Martin Luther King. And if the great attitude is still not enough, you retain your self-respect—which is no small thing.

The bastids can't steal your attitude!
(No matter how hard they may advertently or inadvertently try.)
Your attitude is all yours!
Are you Flagman #2?
Or Dr. King's street sweeper? 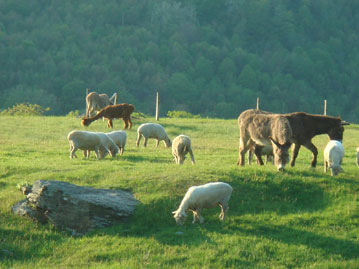