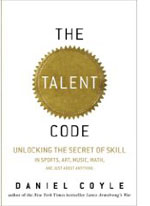 I had a chance to preview Dan Coyle's forthcoming The Talent Code: Unlocking the Secret of Skill in Sports, Art, Music, Math, and Just About Anything. In short, I thought the book was a marvel—explaining pockets of amazing talent, such as Brazil and football-soccer, and, based in part on new findings in neuroscience, turning conventional ideas about teaching and learning on their head. I'll have more to say when The Talent Code appears, and Dan, I hope, will consent to becoming a Cool Friend. In a rather trivial (however, not to me at the time) way I had a chance to practice parts of what Dan discovered—and was stunned at the efficacy of his findings in this small case.

Susan and I arrived in New Zealand about 10 days ago. Although we've been here several times before, I've found that it invariably takes almost a week, or possibly longer, to more or less adequately adjust to left-side driving. With a little bit of luck and Dan Coyle, I slashed the adjustment time this trip by perhaps a stunning 75 percent, maybe even 90 percent.

My typical approach is to head for as large a highway as possible and practice, in a low-pressure context, the fundamentals of driving on the "wrong" side; I delay tough situations as long as I can and go to great lengths to do so. This time, due to a badly botched interpretation of directions leaving the airport, I started out in intense traffic in a constrained space that included several rotaries; this amounted to a half hour in hell. In retrospect I call it the "Brazil breakthrough." (Though I was in New Zealand—the Brazilians have a small-scale version of football-soccer that requires learning numerous clever-intricate moves in the smallest of spaces; it is one of the keys to their national success in the sport.) That is, I did a ton of sophisticated practice at slow speed (traffic) in a very short time, "for real," on a very small "field." Call it a hundred maneuvers at "learning speed" in thirty minutes with about two kilometers of accumulated mileage.

That was lucky—and powerful. But I took full advantage of my luck by applying three of Dan Coyle's rules-findings that I have used before, more or less, but now used with mindfulness and a vengeance. First, I talked constantly-continuously-nonstop-out loud-loudly to myself about every twitch of what I was doing-experiencing. Second, I did so with special fervor and completeness when I made mistakes. And third, in the case of mistakes, I tried to repeat the screwed-up maneuver, within the bounds of safety, immediately. The monologue went something like this, as I said non-stop and loud: "You complete jackass, look left first." "Oh that was great, bonehead, you just cut the guy off." "Look left-left-left, idiot." "Try it again, here we go 'round—okay, go around again and see if you can do it better. Okay, dude, better." "Having fun driving in the left gutter, turkey—okay, let's risk it a little and watch ourselves in the rearview mirror. That's it, better, better, whoops, better, better." And so on. And on.

The four high-leverage tactics—small field "game" with complex maneuvers, constant self-talk, self-discussion re mistakes, followed by more quick tries*—resulted in a miracle of sorts, and in a "life or death" "game" at that.

By the time you read this I may have been in a head-on accident and be dead—overconfidence is a constant and deadly threat. But if I'm still around, I will have had a fascinating experience, and a powerful one. And one with extraordinary implications.

(*If there is a single key to Coyle's findings, it's "mistakes-based learning"—literally generating as many mistakes as possible as quickly as possible.)