Imagine you are trying to travel from your town to another town on a bullock cart. It may be hard for some of you to imagine that. Coming from India, I know that there are lots of places where this is very common. It can take a long time for you to get from one place to another place. If there is one thing that's positive with this arrangement, it is that, in case of an accident, the damage won't be much. 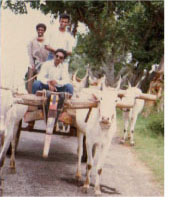 Why? Simply because you can't travel at breathtaking speeds on a bullock cart.

Now, imagine you are on the same journey but now you are traveling in a race car instead. (While people can't imagine that in many parts of India, you can totally imagine it here.)

First, you will notice that you can reach your destination considerably faster than before. It's not only more comfortable to travel in the race car, it's also more fashionable. I can go on with all the positives, but there is at least one negative. As you drive at breakneck speeds, if there is an accident, you may really break your neck.

Now, you may be wondering why we are talking about bullock carts and race cars?

Let's go back to history a bit.

There have been several major economic downturns in the past hundred years. The first one was the Great Depression in the 1930s. Then came the oil crisis in 1973. After that, there was the stock market crash in 1987. The next was the dot-com crash in 2000 and now we have a mess triggered by the sub-prime mortgage in 2008.

Why is the gap shrinking?

One reason: the progress we have made in technology. We have moved from the "bullock cart" to the "race car" when it comes to technology. In the knowledge economy, we can create new possibilities way faster than before. The convenience because of technology (for those who have it) has gone up by leaps and bounds. We can also create a mess a great deal faster than before.

No, I don't want us to be in the bullock carts. Race cars are great. What we can't forget is that, with the convenience and style that comes with race cars, there is a new level of responsibility. Forget this responsibility and we pay a heavy price.

The sad story is that you can act in a responsible way, but you may still have to pay because someone else is irresponsible. You have to face the consequences even if the mess was created by someone else.

What you can do (in addition to being responsible) is be more than prepared to face these consequences. In fact, be not only ready to survive but be ready to think and act differently so that you thrive in these environments.

The choice really lies with us—we can participate in the recession and contribute to it or we can think and act differently and be part of the solution.

[Cool Friend Raj Setty is intimately involved in working with like-minded entrepreneurs to bring good ideas to life and spread their adoption. You can learn more about him at www.rajeshsetty.com.]