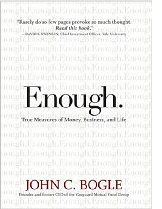 Our renaissance woman-commentator Judith Ellis recently mentioned Vanguard Mutual Fund Group founder John Bogle's Enough. The Measures of Money, Business, and Life. Judith's reference led me to add the 79-year-old Mr. Bogle's opus to my bookshelf. I will simply say that it is one of the best business books ("life" books?) I have ever read, an easy All-time Top 10. And its timing is, well, read it yourself ...

Rather than spend several sentences summarizing the short-but-very-sweet-and-very lucid tome, I'll let the brilliant chapter titles do the work for me. Here's a sample:

As to the overarching theme captured by the book's title, "Enough," Mr. Bogle begins with this vignette:

"At a party given by a billionaire on Shelter Island, Kurt Vonnegut informs his pal, Joseph Heller, that their host, a hedge fund manager, had made more money in a single day than Heller had earned from his wildly popular novel Catch-22 over its whole history. Heller responds, 'Yes, but I have something he will never have … enough.'"

Amen!
And thank you, John Bogle!
(And Judith Ellis.)