What follows is an economic primer from a non-economist:

Warts and all, America is the lynchpin of the global economy.
(And probably will be for next 25 years.)
Citi is a, maybe the, lynchpin of the lynchpin.
In fact, probably.
Psychologically, beyond doubt.
More than ever in a connected, hyper-tangled, wholly mangled world.
Financial system outcomes and movements are a "pure expectations play."
1% math.
99% individual and group and herd psychology.
(Basis of entire system is pure "psych": You deposit a little, they lend a lot, we both pray to any and all gods that the depositors don't all knock on the door at the same time. Hint: they did-are-will pound & wail for the foreseeable future.)
Hence, system precarious 100.00% of the time.
Vicious and virtuous circles are always in play.
Always.
There is no normal.
Never.
Ever.
(Wish there were a psychologist on Mr Obama's top econ team.)
(Or at least someone with a normal IQ.)
("One who knows" reports that Citi CEO Pandit has an EQ of approximately zero.)
(Sorta like L. Summers.)
Soooooo ...
Citi fails.
Depression follows.
(Or at least the odds go up not imperceptibly—and, hence, unacceptably.)
Therefore bailout justified, at almost any cost.
Pump Citi up with a few tens of billions.
Save not improbable downside of as much as tens of trillions.
Globalization threatened if Citi tanks.
25-year setback.
Bailout awful, unconscionable.
Bailout bodyblow to pure capitalism.
No bailout, possible capitalism knockout—or at least a wretched decade or two.
Fact—nobody has a clue.
Systemic interdependencies of this order are truly novel.
And psychological irrationality and the utter madness of crowds—of smart people as well as not-so-smart people—is a perpetual "given."
In a clueless world, one must assiduously attend to lowish probability outcomes with catastrophic consequences.
"Catastrophic" is not a hyperbolic word these days.
"Catastrophe" is an ever-present "plausible" outcome.
"Net net": Bailout "least worst" solution.
Welcome to the real world!
Happy Thanksgiving!
Happy Friday-After-Thanksgiving!!!!!!!!!!!!!!!
Consumption rules!
Buy presents!
Give to the homeless!
Make those Salvation Army buckets sag with Susan B. Anthony coins!
Pray that every sumbitch makes this Friday "Open Wallet Day"!
Got a Great Aunt Maude?
Haven’t seen her for 20 years?
Buy her a 60-inch flat-screen TV!
Better yet, a Ford hybrid!
Better yet, a house at list price!

(Photo below, bear shit from a beast estimated to be 250 pounds—from my farm, up the hill a couple of hundred yards from the main house, exhibited on a wall outside my working studio. Great symbol for a Bear Market, eh? Deposited on Citi Bailout Day. Ah, all is not lost—there are deposits out there!) 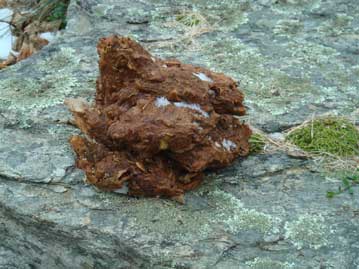