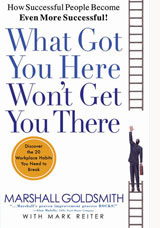 Marshall Goldsmith is widely considered to be the premier executive coach, more or less the inventor of the genre. We have been together on several programs, I like him immensely—and I think he does great work.

Well, that was before I read—really, really read—What Got You Here Won't Get You There: How Successful People Become Even More Successful.

That is, the book that I have belatedly fully ingested is virtually peerless. I don't think Marshall "just" "does great work"—as I said, I think his work goes ever so much farther and merits the use of "peerless," literally without peers.

Bottom line: You must read it! (I'd argue that it's another of those "now more than ever" "commands"—knowing yourself as a leader is particularly important at stressful times.)

Here are a few snippets from a big section of the book titled, "The Twenty Habits That Hold You Back From the Top":

Habit #1: Winning Too Much

"If we argue too much, it's because we want our view to prevail over everyone else (i.e., it's all about winning).

"If we're guilty of putting down other people, it's our stealthy way of positioning them beneath us (again, winning).

"If we ignore people, again it's about winning—by making them fade away."

Habit #2: Adding Too Much Value

"The problem is you may have improved the content by 5%, but you've reduced my commitment to executing it by 50%, because you've taken away my ownership of the idea."

One final quote that I cannot resist adding, doubtless in part because I am 100% in agreement:

"I regard apologizing as the most magical, healing, restorative gesture human beings can make. It is the centerpiece of my work with executives who want to get better."

Read the book!
(Now.)
(Read it in small doses. And ponder what you read.)
(Read it with a colleague or two—digest and practice.)

GOLDSMITH IS NOT ALONE. HE, WARREN BENNIS, AND OTHERS OF THEIR STATURE INSIST THAT SELF-KNOWLEDGE IS THE NECESSARY PRECURSOR TO EFFECTIVE LEADERSHIP OF ALL FLAVORS. SELF-KNOWLEDGE IS NOT SELF-INDULGENCE. SELF-KNOWLEDGE, ACCUMULATION THEREOF, IS THE MOST POTENT MEDICINE YOU WILL EVER TAKE.