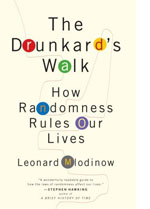 "If I had said 'yes' to all the projects I turned down and 'no' to all the ones I took, it would have worked out about the same."—David Picker, movie studio exec, quoted in William Goldman's classic Adventures in the Screen Trade (cited by Caltech physics professor and author Leonard Mlodinow in The Drunkard's Walk: How Randomness Rules Our Lives)

NB1: Mlodinow's book gets a 10 out of 10 from me, hanging in with Fooled By Randomness by Nassim Nicholas Taleb. (Another fav from Mlodinow: "Mathematical analysis of firings in all major sports has shown that those firings had, on average, no effect on team performance." A dozen or more studies appearing in prestigious academic journals are cited.)

NB2: If Randomness Rules then your only defense is the so-called "law of large numbers"—that is, success follows from tryin' enough stuff so that the odds of doin' something right tilt your way; in my speeches I declare that the only thing I've truly learned "for sure" in the last 40 years is "Try more stuff than the other guy"—there is no poetic license here, I mean it.