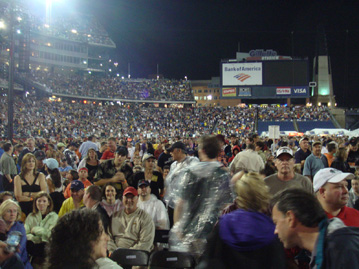 Like it or not, my favorite definition of "quality" or "excellence," like the famous quote about "pornography," has always been, "I'll know it when I see it."

Well, I know it when I see it.

I am not a gaga Bruce Springsteen fan. Or I wasn't at 8:45 p.m. this past Saturday, as a monster thunder storm attacked Gillette Stadium (Foxboro MA) and delayed the start of The Boss's live concert—soggy and bedraggled, those of us on the field were herded (perfect word choice) off to escape our temporary metal floor while the lightning fired away as though Zeus was really pissed at Bruce. I was in turned pissed at my Bruce-besotted wife for dragging me 200 miles (actually, 173) from my VT farm and beloved Kubota to suffer through all this so I could watch a FOF/fellow old fart (okay, he's "only" 58) prance around as though he still thought he was 28.

Well, the storm abated, The Boss showed up—and I, one of Earth's newest Bruce Groupies by midnight, was mesmerized by the most amazing piece of performance art of any sort I've ever seen (65.8 years) or ever expect to see. Three+ hours, non-flagging energy, no intermission at all—he ran to a little table and threw ice water on himself a couple of times without breaking stride. If ever there was a time when the word "excellence" was not hyperbole, this was it.

The repertoire was great, but so what. The passion & energy & performance [P.E.P., "pep"—God help me] per se was the point, the whole point, and nothing but the point.

I really don't want to Blog this—I want to savor it forever & ever! To hell with Cirque du Soleil—or IBM in the early 1980s! I never want to use the word "Excellence" with a cap "E" again other than in ref to Bruce. Gillette.0802.2008. 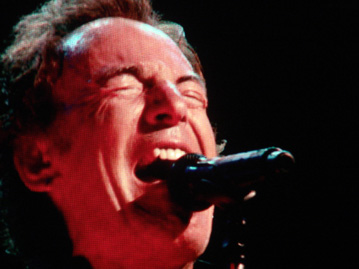 From a review by W. Zachary Malinowski in the Sunday Providence [RI] Journal:

"Last night, the hardest working man in rock-n-roll came to Gillette Stadium for
something like his 95th*-concert since last fall's release of Magic, his latest
CD. The tour kicked off in October in Hartford and has taken the band across the
United States and Canada and twice to Europe. ...

"There's an old adage among diehard fans of Bruce Springsteen and the E Street
Band that goes something like this: there are two types of people in the world,
those who love The Boss and those who have never seen him perform live. ...

"Sure, at age 58, Springsteen has slowed down, but not as much as the rest of us.
He still races around and slides across the stage. He pours his heart and soul
into each performance as if he's trying to convince each ticket holder that this
is an event that he is going to make you remember the rest of your life. If you
didn't like the last song, well, he's going to play the next one even HARDER!
In a time of mortgage foreclosures, layoffs, and $4-per-gallon gas prices,
Springsteen makes sure that each of the 60,000-plus fans in football stadiums
is getting their money's worth. ..."

*TP: Holy shit! ("Everybody" says I have high energy—forget it!) 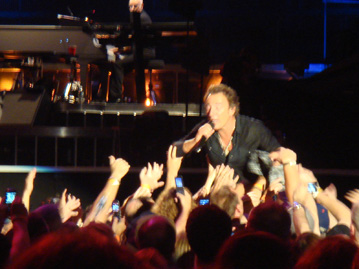