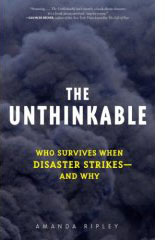 I've rarely seen such raves as for Amanda Ripley's The Unthinkable: Who Survives When Disaster Strikes—and Why.

The idea, told almost exclusively through compelling stories, is that we can do better than we imagine when shit hits the fan—and that it's up to you and me, not the pros, to do most of the work for ourselves and others. If there is a "secret," and there more or less is, it is practice. Fullscale drills, among other things, but little stuff is at least as important. For example, the office worker who walks down the stairs (many floors) to lunch once every couple of weeks—it's a way to train the body, when virtually paralyzed by fear, to do the right-useful thing.

Here are a few one- or two-liners from the book:

"Regular people only feature into the [standard] equation as victims, which is a shame. Because regular people are the most important people at a disaster scene—every time. ... The vast majority of rescues [are] done by ordinary folks."

"Since 9/11 the U.S. government has sent over $23 billion to the states and cities in the name of homeland security. Almost none of that money has gone to intelligently enrolling regular people like you and me in the cause. Why don't we tell people what to do when we are on Orange Alert against a terrorist attack—instead of just telling them to be scared?"

London 2005: "Emergency plans had been designed to meet the needs of emergency officials, not regular people."

"Without too much trouble, we can teach our brains to work more quickly, maybe even more wisely, under great stress. We have more control over our fate than we think. We need to stop underestimating ourselves."

"Realistic practice brings out our faults—and then makes us stronger." "Abilities we think are innate almost never are." "Skill is my ability to do something automatically, at the subconscious level. How do I get that? I do that by repetition, by practicing the right thing. The only way you learn it is to program it."

The idea here is not to scare the hell out of you or me. Or to turn us into fanatic Exit sign watchers. It's to tell some useful stories, and to provide us with some useful strategies. When it comes to the terrorism bit, anyone who thinks we have seen the last of it is living in la-la land.