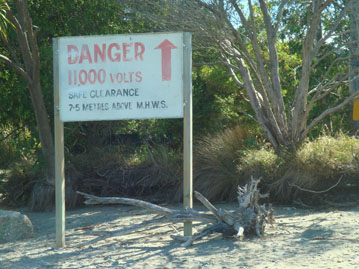 While on holiday in New Zealand ... I got to thinking. As time goes by, "one" (me) tends to complexify one's approach to almost everything. The innocence (and clarity) of "days gone by" is blurred. I know that I am "guilty as charged." (By me.) And I think most of the other "gurus" (horrid term, but it's become part of the biz language) have also gotten away from reality. Hence, I began taking notes for a book-like "thing" that is not, in fact, a book. I titled it:

The book-that's-not-a-book begins with a Thirty Count Indictment of "guruworld." I have provided 30 contrasting pairs, "Guru focus" versus "RW," Real World. Below I am offering the list, FYI.

[If you wonder about the origin of "all this," perhaps the sign, discovered on a beach on Golden Bay, New Zealand, will offer a hypothesis.]

Guru focus versus the "real world":

Guru focus: Big companies and attendant first-order, industry-redefining strategic issues.
Real World: Most of us, still, in 2008, don't work for Big Companies; we labor in "SMEs," Small and Medium-sized Enterprises. (Or the likes of government agencies.) And if we are in a big company or agency, most of our focus is the 17-person department in which we labor. (As to "SMEs," Germany is, ahead of China, the planet's #1 exporter, thanks mainly to focused, high-end middle-sized companies, the Mittlestand enterprises.)

Guru focus: Public corporations.
RW: Most of us work in privately owned companies. (Or in those government agencies.)

Guru focus: Cool industries.
RW: Most of us aren't in "Cool" industries, we do pretty ordinary stuff—like my pal, Larry Janesky, who makes a buck, and then another ($60 million, actually), creating "dry basements," that are free of toxic mold and can be used as a spare room or for a playroom or storing anything and everything; or Australian Jim Penman, who has over 2,500 franchises worldwide doing such things as walking dogs, washing dogs, and installing antennae.

Guru focus: "Excellence" is reserved for GE and GE and GE (or Google or, until last week, Boeing).
RW: "Excellence," bar none, is the fabulous, friendly, informative, instantly responsive pharmacy next door that takes on docs and insurance companies with vigor and usually victory. (Gary Drugs on Charles Street in Boston, for me.)

Guru focus: Boss-less, flat, friction-free, self-defining organizational settings.
RW: Most of us have "bosses." Most of us are assigned tasks.

Guru focus: "Getting ahead" means becoming a "Brand You," in a world where what our peers think of us is more important than the Boss's evaluation.
RW: Most of us still must cater to our bosses to get ahead.

Guru focus: "Cover boy" CEOs with G-4s, trophy wives, and the kids from all three marriages in prep schools with tuitions starting at $50K.
RW: Most of us work for government agencies or in schools or fire departments or in private companies perhaps run by the "millionaire next door," who owns two suits, a 2006 Lexus, stops in the coffee shop on the way to work, and sends his kids to public school.

Guru focus: New "virtual organization" forms of doing business; workplaces with hierarchy are "so yesterday."
RW: Most of us work amidst a rather clear "hierarchy" as depicted on a standard organization chart. (Though there are probably a few less layers then there were a few years ago.) (Want hierarchy? Try Home Depot.)

Guru focus: Creative right-brain weirdos, "with it" in these odd times.
RW: The majority of us are not "new age creatives," but are occasionally quite clever ... and pretty good at "blocking and tackling" in order to "get done what needs to be done."

Guru focus: The immediate threat, to millions upon millions, of being "outsourced."
RW: Most of us aren't especially threatened by the prospect of having our jobs outsourced to India or China or Romania.

Guru focus: Global enterprises "playing in the big league," in a "flat world."
RW: Many (most) of us are only marginally affected by globalization, and our firms don't sell more than a modest share of their products or, especially, services beyond our national borders. (The primary reach of the 18-person accountancy in a mid-sized city of 84,000 is perhaps three miles.)

Guru focus: A world where "the Web is everything, changes everything."
RW: Most of us haven't had our world turned anything like "upside down" by the Web, though the Web has surely had a significant impact. (We communicate with the plumber by Blackberry email from our car, but he's still 5 hours late!)

Guru focus: Our ability to be in instant communication with anyone, anywhere.
RW: Use email, but still practice MBWA—Managing By Walking Around.

Guru focus: An encompassing IS-IT strategy, with everything wired to everything else.
RW: While integrating IS is very important, most of us muddle through, trying to ensure that the IT-enhanced bits (the front-line sub-systems) are marvels of simplicity that deliver the goods for those front-line folks and their internal-external customers.

Guru focus: Strategic planners and CEOs desperately seeking "blue oceans."
RW: Most of us don't spend much or any of our day making grand plans. Never have. Never will.

Guru focus: Thinking "outside the box," of course.
RW focus: Most of us obsess on "doing," pretty much inside the box. (There are enough damn problems in the box—pissed off customers of long standing, etc.)

Guru focus: Complex "systemic change."
RW: Most of us believe in and spend our time doing on-the-cheap, rapid experimentation, picking off the "low-hanging fruit," muddling our way through to big change.

Guru focus: Imposing words-phrase such as "business models," "scalable," "strategic talent management," "customer-retention management," and "knowledge-management paradigm."
RW: Most of us try to use everyday language such as "the way we make a buck" (instead of "business model"), "let's grow this sucker" (not "Is it scalable?"), "hire good people and treat 'em well and give 'em a chance to shine and thank 'em for the stuff they do" (rather than "strategic talent management"), "bust our ass to keep our customers happy to keep 'em coming back" (instead of "customer-retention management"), and "share the stuff you learn with everybody ASAP, don't hoard it" (rather than "executing a knowledge-management paradigm").

Guru focus: Best data base + sexiest algorithms win in our customer-centric enterprise.
RW: Most of us spend our time on "trivial" acts of relationship building with customers, suppliers, leaders in our community, etc.

Guru focus: The relentless pursuit of "synergies."
RW: Most of us focus, focus, focus in order to stand a chance of succeeding in the marketplace. (Those astounding German "Mittlestand" companies again, or Larry Janesky, the dry-basement guy.)

Guru focus: Acquisitions and mergers aimed at expanding our "reach" and "market penetration" and "market share" amidst a zero-sum game, thus reducing risk courtesy a "diverse" portfolio and smothering ("killing") the competition.
RW: Play from our strengths, work like hell to enhance those strengths, and survive-thrive via "organic" growth and executing very, very well.

Guru focus: Totally "new rules for a new game," dramatic new "management tools" that "change everything."
RW: Most of us are learning new things, but nothing that's particularly "revolutionary" as we labor mightily (fulltime) "just" to "get stuff done," improve relationships, find good folks and keep 'em by showing appreciation and respect, and providing opportunities to get ahead.

Guru focus: Hiring PhD mathematicians to design obscure algorithms that allow the creation of the likes of "risk free" derivatives and, hence, stunning "competitive advantage."
RW: For most of us, snappy execution of the "timeless" "basics" is Job #1. (And Job #2. And Job #3.)

Guru focus: Built to last.
RW: Most of us muddle through, trying to make it to the end of the week while keeping our customers content.

Guru focus: Disruptive Innovation is #1.
RW: We "invent" everyday "tools," such as Xeroxed (paper) checklists, aimed at preventing "line infections" and thus saving thousands-of-lives-per-year of ICU patients, in the U.S. (In a similar vein, as it were, the British observers estimate that over ten thousand lives per year could be saved in hospitals by providing most patients with compression socks that help prevent deep-vein thrombosis.) (Call it "un-disruptive innovation," with inordinate power?!)

Guru focus: Describe "new age" mortgage bankers, loaded with "intellectual capital" and "integrated systems" who "package" loans as soon as possible and sell them to financial service institutions who create and sell derivatives based on the packaged mortgages—which are in turn re-packaged as super-derivatives.
RW: As, say, a young mortgage-lending officer in a town of 18,000, whose Dad runs a local car dealership, take Mary and John to lunch to get a grasp of who they are before lending them $450,000; and after the loan, call or drop by every, say, three or six months to see how things are going—even if all payments have been on time.

Guru focus: "Changing demographics," "the new Gen X world," as many discrete market segments as there are customers.
RW (I wish): Our primary customers [85% of the time] are women—find the right team [lotsa women in senior management] and go for it. We also, to make a buck, have gotta aim more at boomers or near-boomers, and "geezers" [who collectively have all the dough], and less on callow, so-called "trendsetter" youth.