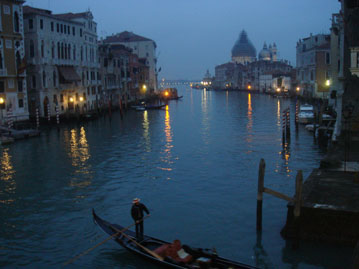 So goes the conventional wisdom concerning our astounding industrial might. Well, there's not much doubt about either the "industrial might" or the power projected thereby ... but the Henry Ford contribution may be a bit specious.

"Wee" Venice was a world power for about 600 years, and more or less ruled the world for perhaps 300 or 400 of those years (e.g., it conquered and controlled Constantinople for centuries). Venice cobbled together the first "imperialist" empire. Its "core competencies" (translation: strengths, stuff it was good at) were trading skills and the projection thereof courtesy a peerless navy.

The source of the Venetian Navy's excellence?
Mass production!

The Arsenale was Venice's highly fortified shipyard. The base procedure for shipbuilding was straightforward labor specialization in a fully developed production line format.

The world's most powerful and best-armed warships.

Turned out at the rate of ... one plus per day!

I love the fact that the "excellence" of such places was soundly and more or less exclusively based on superior "distributed-decentralized network management" (traders, bourses, mapmakers, navies, old-style "internets" with numerous hyperlinks) emanating from highly developed "intellectual capital" and an untrammeled, incredibly competitive-Darwinian "entrepreneurial instinct."

(Alas, the Arsenale is in a state of disrepair, so you'll have to settle for a generic picture of Venice taken at sunset on Christmas Eve.)