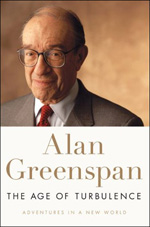 I never expected to be blogging Alan Greenspan's autobiography, The Age of Turbulence: Adventures in a New World. (I never expected to read it, frankly.) But I am thoroughly enjoying it—and for me it's actually a page-turner. The book is divided in two—the personal bit, and essays on basic principles of Capitalism, a global world that is mostly beyond the control of the Fed, and the like.

Most of the press has featured Greenspan's less than complimentary views of the Bush White House. That may well be, but not only is that not the page-turner part for me, but I am simply skipping it.

The surprise and delight are that the book is wonderfully written and hence moves along with style most unusual in autobiographies. But my true interest is the more general parts; that is, how Greenspan came to acquire his free market views (Ayn Rand was an important influence), and then the details of his deeply held beliefs about Capitalism and the like.

For me, this is a superb book—and it will be my companion on tomorrow's loooooong flight from Sydney to LAX. It beat out another book worthy of superlatives—Ron Chernow's Alexander Hamilton. The Hamilton biography is, yes, another page-turner; the drama (exactly the right word) surrounding Hamilton's establishment of the economic order that is in many ways with us today is as tense as any thriller—in fact, it is the ultimate thriller. It is also perfect to accompany Greenspan—their views are very much in accord.