From the Streets of Sydney (More Accurately, The Rocks) 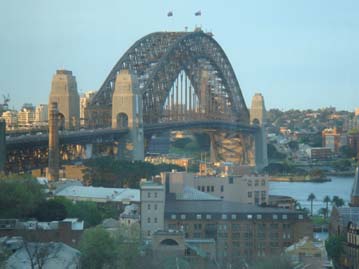 I've been writing pretty voluminously about Design for some 20 years. I have slowed down recently as it has become "in" and my work as prod-provocateur is largely done. While my ego would like me to take some credit for Design's march up the priority scale, the truth is that the accolades go mostly to the likes of China and Wal*Mart, the Mighty Duo. As the market for low cost stuff turned one thing after another into a commodity, Design won the "only thing left" to differentiate product after product.

(The recent overuse of the term "experience" has at once supported Design consciousness—and hurt it. I'm among the lot that frequently uses "experience" rather than "design." "Experience" is cool—and, indeed, potent as a differentiator. "Design," per my peculiar definition, comes directly from the genes—it's very basic, hence very, very potent.)

To skip steps, I was at one of my favorite bookstores (i.e., specialist in great stuff and weird stuff—The Gas We Pass: The Story of Farts) in the world, Ariel, at The Rocks in Sydney. Through jet-lagged eyes, I stumbled upon Design: Intelligence Made Visible, by Stephen Bayley and Terence Conran.

Oh, what a wonder!!
I'm hooked on design all over again!!

My mushy head took me back to my first trip to Beijing, in 1986, not that long after China began its (short) march to capitalist powerhouse. I was immediately struck by the bright clothing—very, very bright. The older (45+??) generation was still a sea of gray Mao jackets—but, oh, the youngsters!

It struck me, not a novel observation, I'm sure, that, given the chance, people universally moved to "stuff" that was energetic, and had a touch of style. Of course, 20 years later, China is home to a burgeoning set of the very cool.

And it strikes me again—with Bayley and Conran—that Design is, in the most fundamental terms, what makes us human! (Yikes, a potent assertion—did I write that?) You may not agree, but think about it. In fact, for one thing, I've noted that design-insensitive guys (like me) spend as much time in hardware stores deciding on which hammer will grace their garage or basement wall as many women might spend selecting a sweater. (Sexist? Tough.)

So, we're "doing" design more—and that's good. But, are we really using it strategically—has it gotten into the culture and soul of the enterprise, Sony style, Apple style, Deere style, OXO style, FedEx style? That's what I'm going to start yapping about. It's a bit like the "women's stuff" I'm obsessed about. It ever so rarely gets beyond "program"—and becomes a (very profitable) "way of life." (And "way of life," to be crude, is "where the loot is.")

My favorite three quotes from Bayley-Conran so far:

"You know a design is good when you want to lick it."—Steve Jobs
"Design is first and foremost an attitude."—Roger Tallon

"It's futile to pretend that industrial design or styling has any other function than to support marketing."—Ford executive*

(*I still own a small office building in Palo Alto. My tenant is BMW. I think I'll run this last one by them the next time I'm in the Bay Area.)

(Proof, of sorts, of the power of this book: Though available at amazon.co.uk, I'm going to drag it from Sydney to Brisbane to Sydney to LA to VT in the next 6 days. Why? I need to lick it a little, Steve.)