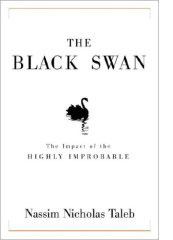 I've mentioned and recommended Nassim Nicholas Taleb's book The Black Swan: The Impact of the Highly Improbable, perhaps a half dozen times in recent months.

And here I go again, with both urgency and amusement.

We are muddling through a Black Swan moment—and paying the price for overconfidence in the likes of mathematical models that encompass our financial infrastructure. Market turbulence is at a high pitch, and may get higher. The mathematically-based derivative markets, accounting for trillions of dollars, are getting whacked. And Nassim Nicholas Taleb, I suspect, is laughing his a#^ off.

In The Black Swan, he tells us that most of our professional efforts are aimed at understanding and mastering phenomena that are explainable. (Duh.) But such efforts are positively useless, nay, dangerous, when that nutty outlier drops down for a landing. His data, in fact, show that in case after case (e.g., the stock market) the lion's share of long-term variation is attributable to a tiny number of Black Swan events—perhaps 5 in 50 years.

So our boy (girl) mathematical geniuses have bet the farm—gajillions of farms—on models that have almost zero immunity to Black Swans; in fact, their and their bosses' naïve (stupid!) overconfidence is a primary cause of their under-preparedness and the subsequent impact.

Rudy Giuliani may well become president. If so, it will be because of a Black Swan—his reaction, in a very lengthy career of public service, on a single day to a Very Black Swan.

Can you prepare for a Black Swan? In one sense, no, at least not specifically; that's the whole point. But you can, at a minimum, consider the degree to which your actions and procedures concerning damn near everything, and likewise those of your organizations, rest on assumptions of continuity. (Hint: They do.) Of course China is a "shock to the system"—but, in fact, it has taken and will take decades for its impact to unfold. I'm talking about the events of a day or a week that could unravel a life's work—or make you president of the U.S.A.

Your life most probably will be made or unmade by the arrival of one, two, or three Black Swans.