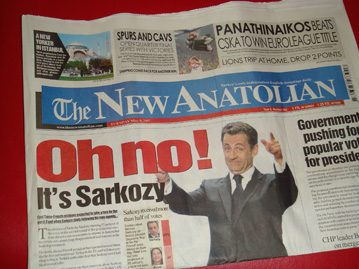 As you can see by the headline (above) on Ankara's English language newspaper for 0508.2007, the Turks are not exactly thrilled with the French election results. Sarkozy bluntly declared on the campaign trail that there was no way in hell his government would support Turkey's membership in the EU.

(For what it's worth, and the answer is "not much," I think it would be an epic strategic mistake to shut out this moderate Islamic country. Of course there are a jillion ramifications—but my vote is a crystal clear "Yes" for membership.)