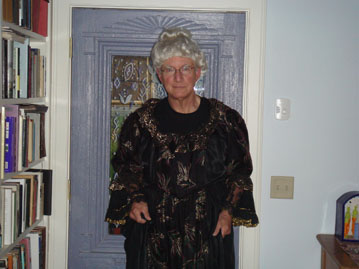 In the end it was, to be precise, Harry Burn's mother who made all the difference. A suffragette, she wrote to her son, age 24 and Tennessee's youngest legislator, saying, "Don't forget to be a good boy and help Mrs Catt ..." He did, tipped the scales on a 49-47 vote, and brought, effectively, to an end a struggle that in its most open form had lasted 72 years, 1 month, and 5 days. With Mrs Burn's urging and Harry's courageous vote on 18 August 1920, some 26 million American women were franchised in one fell swoop.

But that gets ahead of the game. Above you will find a picture of a 64-year-old male wearing a white wig and a black dress. In fact, a shamefaced 64-year-old. Said 64-year-old, M, purports to represent the spirit of Elizabeth Cady Stanton, rightfully called the Mother of the American women's rights/women's suffrage movement.

But that gets ahead of the game ...

It was a simple costume party in Dorset, Vermont, at the home of our friends Jill and Dave Sands, on March 31, this past Saturday. The idea was to dress as someone you admire—and be prepared to respond to questions as the admired personage would have responded. I thought it would be great fun, and therefore took it seriously. Franklin? Churchill? Nelson? John Paul Jones? Monty Python? No problem, I had them all pegged. And a satisfactory costume would hardly be a challenge (e.g., Churchill, cigar & brandy; Nelson or Jones, folding telescope or bits of my mildewed, 40-year-old Navy uniform).

That was 5 weeks before the party. And now was now—31 March 2007. And now, following Susan's "sartorial" guidance and that of a close friend who is an eminent women's historian, I was encased in a white wig and long black dress, courtesy a Boston costume shop, and, though tripping over my hems again and again ["Welcome to our world"—Susan], ready to go—and, courtesy a dozen books hastily ingested on a dozen plane trips, ready to respond to questions and declaim, among other things, on Mrs Burn, her young son Harry, Carrie Chapman Catt, and, of course, the angry, tenacious firebrand, Elizabeth Cady Stanton.

I was indeed shamefaced—shamed, after a dozen years loudly and doggedly championing change to women's still diminished role in business and government, that I was almost totally ignorant of the astounding history of the American women's rights movement. And worse yet, of the gruesome details of women's status in our society only 100 years ago—that makes the use of the loaded word "slave" entirely appropriate, beyond question, as I see it. It was no coincidence that the American's women's movement, effectively launched in Seneca Falls, New York, on July 13, 1848, grew in tandem with the abolitionist movement in America.

On the other hand, the last 5 weeks have been an absolute ball! There is simply nothing but nothing that I enjoy more than sinking my teeth and heart and soul into a new historical topic. I did indeed devour a dozen books from the original, and always controversial, works of Mrs Stanton to middle school books on the life of Susan B. Anthony. In particular I learned from:

In Her Own Right: The Life of Elizabeth Cady Stanton, by Elisabeth Griffith; Ladies of Seneca Falls, by Miriam Gurko; and Century of Struggle: The Woman's Rights Movement in the United States, by Eleanor Flexner and Ellen Fitzpatrick.

*I learned of the fateful luncheon meeting in Seneca Falls in July 1848 that was hosted by Mrs Stanton and attended by 5 "ladies" including Lucretia Mott, one of the subsequent superstars of the movement, the convention that followed 6 days later, the first of its kind—and the brutally negative and demeaning reaction thereto.

*As I said, I read with my mouth often seemingly open, about the total (as in Cap T Total!) absence of rights of American women and, almost as important, the contempt with which their so-called frail and vacuous and largely useless selves were held by males one and virtually all, from the ignorant to the most learned. And I learned—concluded—that, as I said before, women were de facto, and de jure, the equivalent of slaves, denied fundamental and trivial rights alike, and even a modicum of respect.

*As an orator myself, I learned of the critical role of powerful women orators in the women's rights movement, especially the Grimke sisters, the first women to speak in public to an audience with men—and the brutal and demeaning response thereto.

*I learned of the stream of small steps forward (some minor property rights established by New York state—subsequently reversed); and the first granting of the vote, in the Territory of Wyoming in 1870 by a "legislative" vote of 6 in favor, 2 against, and 1 abstaining (on 07.23.1890, Wyoming became the first state to grant the franchise to women—bravo).

*I learned of the unabated viciousness and bitterness and "dirty trick" tactics unleashed by male legislators and media barons and "men on the street" of all classes that attended the 72-year struggle, from the 5-person luncheon/cabal at Seneca Falls on 13 July 1848 to Nashville and the enactment of the 19th amendment to the Constitution of the United States of America on 26 August 1920.

*I learned of the role of "demented" [my word] optimism and matchless relentlessness that marked the movement—909 political campaigns, mostly failures, between 1868 and 1920, according to Carrie Chapman Catt (campaigns at state party conventions to include woman suffrage planks—277; campaigns in state legislatures to get suffrage amendments before voters—480; campaigns before 19 successive Congresses of the United States; etc.).

*And I learned that I was hardly alone in my own ignorance of the history of the American women's movement, and hence my de facto diminishment (ignorance is never an excuse) of the role and lot of women in our so-called egalitarian democracy. Typical of our "modern" approach to women-in-American history was the "towering" Oxford History of the American People, by the "towering" historian Samuel Eliot Morison; he honors the 19th amendment with two (count 'em) sentences in a section of his book with the exalted title, "Bootlegging and Other Sports." There is a monument to Morison on Commonwealth Avenue in Boston that I routinely pass as I powerwalk; in the future I shall snort derisively and turn my head from his bronzed gaze upon passing this contemptible male chauvinist pig (ironically there is a monument to women's rights pioneers about two blocks further along the Commonwealth Avenue mall—I shall accordingly genuflect).

I dwell on this story because it describes a personal journey away from ignorance that was, well, a blast—and, I believe, important. (I shall campaign, starting in 2007, for far greater attention to the history of the women's movement—still woefully skimpy; and not corrected by the recent "feminist" movement.) I also dwell on this story because innovation, including social innovation, is the "business" theme nearest and dearest to my professional heart—and the most important business issue of this, and, frankly, every era. It is my longstanding argument that all innovation is irrational, non-linear, and anything but the product of plans and focus groups; it is instead about anger to the point of rage that eventually boils over (from suffrage to the PC); "a little band of brothers" (whoops, the 5 great sisters of Seneca Falls and a slew of successors); willingness to suffer vicious smear attacks and unspeakable opprobrium of both a professional and personal nature, passion (!!!!!!!!); relentlessness (!!!!!!!!!—72 years, 1 month and 5 days from lunch at Seneca falls to ratification of the 19th amendment by Tennessee, the 36th state to do so; and those 909 political campaigns); tolerance for setback upon setback upon setback (Churchill: "Success is the ability to go from failure to failure without losing your enthusiasm"); and the strokes of luck such as the willfulness of Harry Burn's blessed mother.

All the above made the sacrifice of wearing a wig and a long dress for 5 hours seem like small beer!* (*Hmmm, should I have gone as Harry Burn's mother?)

"She had survived her husband, outlived most of her enemies, and exhausted her allies. Her mind remained alert, her mood optimistic, and her manner combative." [ECS 80th birthday celebration, attended by 6,000 people]