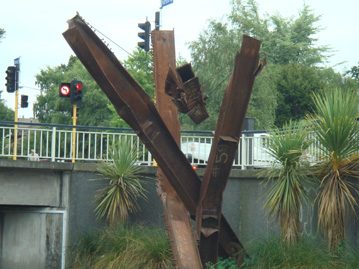 As we celebrate President's Day, it seems appropriate to look back at 09/11, courtesy my New Zealand trip. On 0211, we were in Christchurch, heading home. On a short walk, I spotted an odd sculpture on the street. Turns out, see above pic, that it is a tribute to 09/11's firefighters; moreover, it is made of twisted beams from the Twin Towers—sent by request to NZ's Christchurch firefighters. The next morning, on more or less the same walk, I came to realize that the memorial was but a block from the HQ of the Christchurch firefighters battalion. Though it was 6 a.m. (light in NZ!), I decided to knock on the door, figuring that the HQ would be manned 24/7. Indeed it was, and I spent an emotional 15 minutes thanking, as a U.S. visitor, the firefighter who answered the door and, via him, his colleagues for their thoughtfulness. Fact is, I was to my surprise in tears for most of the conversation—as (good God) I am as I type this. The memorial is one of just five such artifacts in the world. In 2002, Christchurch was hosting the world firefighters games (their Olympics); since they were the first such games since 09/11, Christchurch decided that a memorial was in order—and NYC cooperated, as you can see.

Commander Kurt Wendelken, SC, USN, was seconded to CENTCOM's HQ in the Middle East. We have been irregularly corresponding—which started with the tompeters.com Blog. Kurt recently honored me with a CENTCOM soldier's cap, with my name inscribed in English and Arabic. As you'll see below, I posed with the cap—photo credit to Abbey Bishop, our VT major domo. I figure it's not dishonorable for me to don the cap, in part because I was a ground fighter (builder-fighter working with the USMC) in I Corps Vietnam in 1966–68.

P-day should remind us all, regardless of present turmoil, what the 207-year-old U.S. experiment is all about. 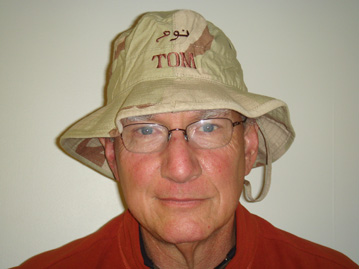