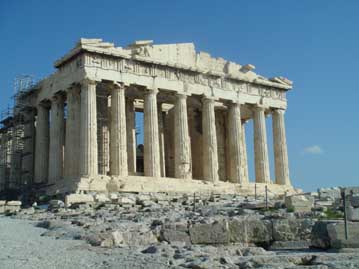 Many—including some of you, me, and the late Peter Drucker—have said that management needs its new Copernicus. In a recent dust-jacket blurb, I even had the gall to suggest that the new Tapscott-Williams book, Wikinomics: How Mass Collaboration Changes Everything, might be a rough draft of a new theory-of-everything—when it comes to organizational behavior. (I also said—and meant—something similar, in 1987, about Stan Davis' Future Perfect.)

When it comes to leadership in "this modern age" ... I think the Old Greeks (I'm safe & sound in Athens—fresh from an inspiring visit to the Acropolis) will do just fine. I don't wish to sound like a fuddy-duddy, but when it comes to Leadership, there is nothing new under the sun—though there are surely timely manifestations.

Frankly, I got thinking about this courtesy a Comment on my "servant leadership" Post—which said we need new models of leadership. Also, I am bombarded with requests to speak on "21st Century leadership"—I agree, but then I turn the tables upon arrival.

I had a truly great year on the topic of leadership! In particular, as I've told you before ad nauseam, there was my glorious summer spent with U.S. Grant. There is, to leap ahead, literally nothing I learned (or had re-enforced), from Grant that does not apply, semi-colon for semi-colon, to "Leadership2007."

This post could run hundreds of pages—but I'll restrict myself to just a couple more paragraphs. At root, leading human enterprise is, in the immortal words of David Byrne ... same as it ever was. I.e.: "It's the people, stupid." In the less immortal words of yours truly: "Leaders 'do' people." Thence the stuff we're talking about in these current Posts—servant leadership, leadership as providing customer service and "scintillating experiences" to those for whom you are responsible, "only connect," "emotion matters" (as in, What else is there?). One (me!) suspects these very issues were as important among our aboriginal ancestors thousands of years ago as today. As to the likes of the "new technologies"—the human issues surrounding change (Who moved your cheese?) are also invariant.

(Even—especially?—the "unprecedented" "change" /"speed of change" argument is suspect. In General Grant's day the arrival of the telegraph was as radical, I think you could argue, as the arrival of the Web. "Unprecedented change"? My Mom, who died in 2005 experienced, among other things: the arrival of radio, long-distance phones, TV, computers, the Web, cars, flight (Wright brothers to 747s to Neil Armstrong), WWI, the Great Depression, WWII, the Cold War, the Korean "police action," Vietnam, Gulf Wars I & II, the scourge of HIV, etc, etc. By her standards, I've (we've) experienced a cakewalk!

I've got a new slide I use early in my current presentations: "The older I get, the less boring the 'basics' get." We indeed need new & radical models of organizations/organizational effectiveness. Hey, that's what I do for a living. But I also—and mostly—try to make "appropriately fresh" the idea that if you give people unstinting respect and an opportunity to learn and grow and be of service and be proud of what they do and who they do it with ... well "good stuff will happen."