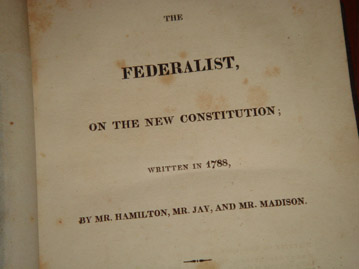 I gave Susan a MacBook Pro15 for Christmas—and was pretty damned proud of myself. (I plan to RTM—return to Mac—in 2007.) But she left me in tears, as she turned back the clock to about 180 B.M. (180 years Before Mac.) Yep, I wept when I unwrapped a mint condition 1818 edition of The Federalist—see photo above. (The 1818 was an original—that is, the original original plus current-to-1818 addenda from James Madison et a few.)

The period from the end of the Revolutionary War through about 1815 or so is my hobby. The end of the war was the beginning of an intense and at times acrimonious effort to define human governance in a totally original way.

I love the period as a very amateur historian; but I also love it because this struggle for appropriate organizational models has been my professional preoccupation for over 30 years.

(Obviously this has ramifications for Iraq. The Battle of Baghdad was over in a flash; the effort to achieve stable and equitable governance thus began—and it's been the tough nut to crack. In fact, obviously, the nut has not been cracked—and may not/probably will not be cracked.)