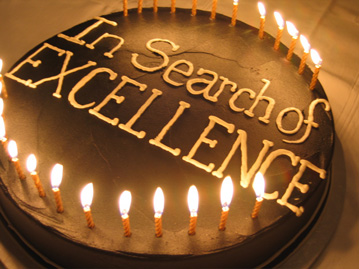 I had to look it up! British management writer Stuart Crainer wrote, in 1999, The 75 Greatest Management Decisions Ever Made. E.g., in the "Marketing Magic" chapter there is the tale of Richard Sears' decision in 1891 to put all his products into a catalog. (Sixty-five percent of Americans still lived in the sticks—and the catalog grew from 32 pages in 1891 to 532 in 1895.) But "Great Decision #45" was the one I was looking for: "In April 1978 McKinsey's John Larson decided to ask colleague Tom Peters to step in at the last minute to make a presentation on some research he'd done. The presentation led to In Search of Excellence."

Apparently (per Crainer) the presentation, to Dart Corporation (Dart Drugs, Tupperware, etc.) in L.A., was made on Good Friday 1978. I do remember that I had less than 24 hours to get my act together; Larson, who ran McK's S.F. Office and was no particular fan, suffered a computer crash that destroyed the mother lode of data he'd intended to present—so he decided to hold onto the meeting, but offer me up as a questionable sub for his all-star data jocks. I remember rather clearly that I hadn't a clue as to what to call my hastily assembled "findings." Somehow the word "Excellence," all by its lonesome (no date, no nothing), ended up on the cover. I wasn't moved by it, and frankly the presentation was no award winner—but I recall a surprisingly intense discussion bubbled up around the meaning of the word "excellence" in business. I guess that was a tip-off—though only much later did I realize it; in general, just putting "the word" on a screen (via transparencies in those ancient PPP/Pre-PowerPoint days) triggered a robust exchange.

To make a long story painlessly short, 4.5 years later Harper & Row shoved In Search of Excellence onto bookstore shelves—mid-October 1982. And the rest is ... whatever.

Advanced math suggests that when the clock strikes midnight 2 days from now, we'll be entering ISOE+25, the quarter-century anniversary year of the book's arrival.

I'm psyched! That I'm still around. (I was 23 days short of my 40th birthday on Search's pub date.) That I still get semi-annual royalty checks from Search. (Not that many books are on the active duty shelves 25 years post initial appearance—the non-virtual shelves, not just the Amazon-Long Tail virtual "shelves.") And that, as I see it, the message—the power of Excellence per se, the word, the idea, the images—is as potent, if not more so, in 2007 as it was in 1982.

I'm psyched because I plan to join with colleagues from here, there and everywhere—starting now with our Blog Community—to celebrate & re-commit to the Idea of Excellence in our lives and in our organizations.

[Cake acquisition & photo by Erik Hansen; bakery name to come.]
[Addendum 01.02.07: The bakery is Party Favors on Beacon Street in Brookline, MA. Our thanks to them! And Happy New Year, everybody.—CM]