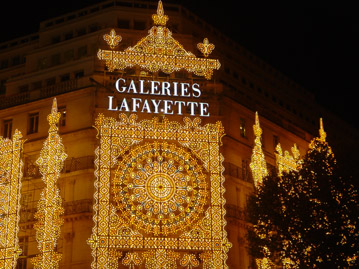 Tom's in Paris speaking to Rompetrol, a Romanian oil company that is the 7th largest in France (according to Wikipedia). It was founded as Romania's state petroleum company in 1974, and privatized in 1993. Tom tells us that "today it is energetically pursuing both an upstream and downstream growth strategy."

[Note from Tom on the photo above: "It doesn't get much better than strolling in Paris at Christmas. I've never seen the likes of the lights and decorations at the Galeries Lafayette, right behind the Opera; it goes on for blocks—and makes, dare I say it, Harrod's look puny by comparison." See more of his fantastic Christmas photos from Paris at Flickr.]