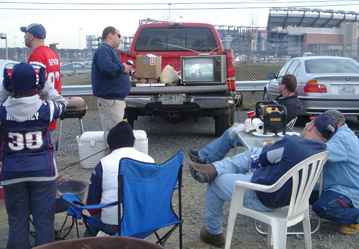 A Patriots-Bears game at Gillette Stadium was as good a way to end the Thanksgiving holiday as I can imagine. My 21-year-old stepson Ben, at school in Durango, Colorado, declares he may be Durango's only Pats fan out there in the heart of Broncoland—hence I felt the need to deliver a Pats victory for him to take home, or at least a good seat. We got the good seat and the victory in the first visit to spectacular Gillette Stadium for either of us. It was a sloppy game (lots of turnovers), but most games between excellent teams are "sloppy," which is an inevitable product of the best playing each other as hard as is humanly possible.

Only two things marred the game for me. Fact is, I'd sworn I'd never go to Gillette after the P&G acquisition of the local company. In my opinion, local bias aside, it was yet another totally unnecessary business combination—accomplished primarily because the Gillette CEO won a $165,000,000 personal prize for selling the company. (Mr Kilts gained defining infamy in my book by subsequently threatening Boston with post-acquisition job losses because the local-Boston press had the temerity to wonder whether his personal gain had been on the high side.) But I gave in ... for Ben's sake.

The other dark cloud was a bit more abstract and a lot more mood dampening. When the Pats score at home, a few guys in the endzone in colonial-patriot uniforms fire a volley skyward with copies of period rifles. Good fun! Except those damn guys dressed in their reproduction garb got me thinking about the original ragtag gang at Lexington and Concord. Their unlikely heroics were an essential part of the founding episodes of a nation that had not only come to be an imposing power, but more important, a matchless beacon of liberty and justice around the world. "Little" episodes, we learn these days, can deliver a roundhouse punch to a brand image patiently constructed over decades. As the news from Iraq goes from bad to worse by the day, it would seem clear to me that our misadventure in that country, perhaps legitimately conceived (???), but executed with breathtaking arrogance and incompetence and disdain for the likes of the Geneva Conventions, has not only dangerously destabilized the entire world but also whacked U.S. "brand power" at a very bad time. Market power today, as always, and more so than ever for that matter, from nations to companies, is about character as much as or more than size-of-arsenal. Put it this way, we've got a lot of catch up to do—and thinking about that as I gazed upon our reproduction patriots cast a pall on my day.