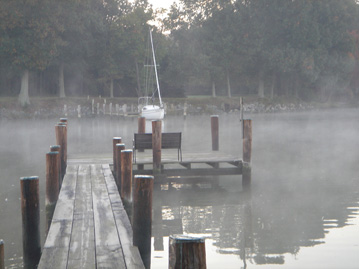 Back "home" (Annapolis, where I grew up) for a wedding this past Saturday. Spent the preceding and following nights in Oxford, MD, heart of the "Eastern Shore" (of the Chesapeake). Little sleep due to the deafening sound of Canadian Geese headin' south. The Eastern Shore flyway is one of the most important eastern migratory stops—and the migration is an amazing and moving sight to witness. In a couple of weeks, I think, there will be millions of our feathered friends parking here.

The picture above is "morning in Oxford on the Tred Avon River;" below is an oyster boat, with tongs, berthed at Tilghman Island. (A couple more pics are at Flickr, including one of the rare bits of humor, from an Eastern Shore political poster, surrounding the upcoming election.) 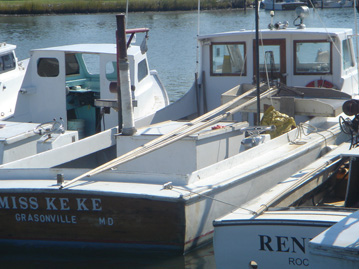