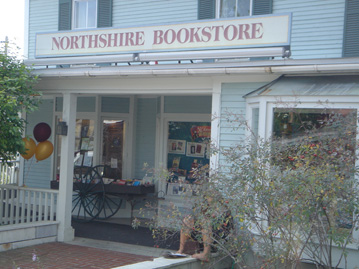 Must read: Michael Shuman's The Small-Mart Revolution: How Local Businesses Are Beating the Global Competition. (A great companion to Bo Burlingham's Small Giants: Companies that Choose to Be Great Instead of Big, discussed here several times.) I pick this time to mention the book because of a local happening that occurred yesterday. My closest town is Manchester Center, Vermont (pop 3,000; Tinmouth, where my farm is, comes in at 500). Small though the town might be, "our" bookstore, Northshire Bookstore (see picture above), won the ultra-prestigious Publisher's Weekly "Bookseller of the Year" award this year. It is deserving—a true "small giant" that "gets" the Small-Mart idea. (Big*Mart in bookselling, of course, is Borders and Barnes & Noble.)

The "yesterday" part of my remark refers to Northshire Bookstore's 30th birthday—celebrated with a blowout party yesterday. One reason for the store's sustaining Excellence is its devotion to re-imaginings—for example, a recent program, which cost the owners a pretty penny, doubled the store's size and was accompanied by complete re-merchandising. The store was already "fine enough and then some"—but "fine enough" is not enough for any of us or our enterprises in 2006.