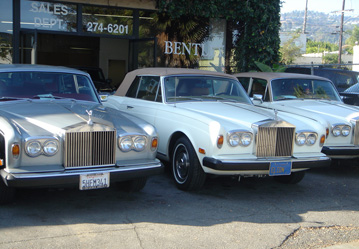 Indeed, I did leave my heart in San Francisco, where I lived in the City and then on the Peninsula for 30 years, more or less. Nonetheless, I'm one of those who also love and have long-loved peerless LA. It was my "port of entry" to California in 1966. Actually, I was up the road a stretch in Port Hueneme—among other things, Pacific Headquarters of our Naval Mobile Construction Battalions.

Well, I was back in LA yesterday, and out near Palm Springs giving a talk at the annual InformationWeek 500 gathering of IT execs. Upon returning I went out for my daily (speed) amble—and enjoyed every minute of it, as I cruised down Santa Monica Boulevard, Wilshire, et al.

Yup, I had a great time—but the meaning of the word "caricature" was in evidence. I was staying in West Hollywood. (Tell the truth, at the Four Seasons, thanks to my Client's donation to the TP Fund. Though in West Hollywood, the 4S stoops to "title inflation" by calling itself the "Four Seasons Hotel, Los Angeles at Beverly Hills." In fact, B.H. starts about a block away.)

I reached at least one conclusion on my little adventure. The Women of LA all have at least 20 fingers! There is simply no other way to explain the frequency of nail salons—hey, I was tempted. The other shopping staples (again & again & yet again) are home furnishings stores, and, yes, centers for plastic ("cosmetic"!) surgery. Of course there is indeed the Rolls-Bentley dealership—see above. And you know something's going down when the vacuum cleaner store has, prominently listed on its window: "Berlin. Paris. Rome. Sydney. Etc." Miele, naturally. And did I mention, I kid you not, the mild epidemic of Lamborghinis? As I said, caricature.

My walk probably tallied six miles, not bad after an all-nighter preparing my speech. Mostly it was that long because I was determined to keep walking until I found, in the low-rent environs, a Starbucks. I did, at about the three-mile mark; I took my laptop in my backpack, and worked for an hour or so at the shop.

I'm almost tempted to re-register to vote in CA so I can pull the lever for Ahhnold. The Guvenator (many "Guvenator" hats and T-shirts at LAX) in fact seems a perfect fit for earth's 40-million person sixth largest economy. As far as I can determine, he's doing a pretty good job—and he fits California to a T. (In SF in my time we had the dapper Willie Brown as mayor—he is SF!)

I can also report that the air is a helluva lot cleaner than when I arrived in '66. There are still a lot of nasties floating around—but the particulates that cause the smoggy look are waaaay down.

Enough. In 110 minutes, speaking of smog, I leave for Seoul.