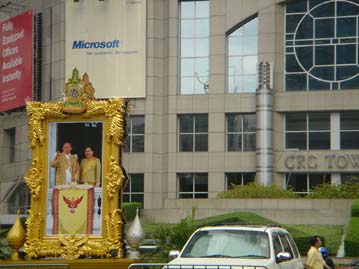 His Majesty the King is celebrating his 79th birthday soon—memorials to him are everywhere. Their Majesties at Microsoft evidence little that's kingly these days—once again they've discovered the Internet. And, frankly, CEO Ballmer and even new software guru Ray Ozzie look pretty shopworn in most pictures—no doubt Ozzie is a genius (Lotus Notes launched his trajectory of fame), but putting an old guy in charge of creative in 2006 seems a little off. (And at 63, you'd be hard-pressed to cite me for "ageism.")

NB: Speaking of arguably past-peak companies, Merck decided to make the Head Lawyer the next CEO; while I certainly acknowledge the continuing Vioxx problem, Merck's deeper hole is sluggish drug-discovery practices; perhaps it's just bias, but is a lawyer really the best guy for that?