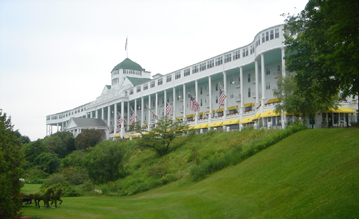 Lots to report (later) on my Michigan Health & Hospitals Association Meeting at the grand Grand Hotel on Mackinac Island. For starters, the hotel claims the "longest porch in the world" (see picture above). Don't know how they could be sure, but I can say for sure that it is one hell of a porch! The extraordinary hotel is surrounded by extraordinary houses (see new stuff at Flickr); I assumed the houses were built by the auto barons—turns out that they were birthed about 20 years before the world of autos emerged; instead these villas were mostly constructed by the Meat Packer Barons of Chicago!