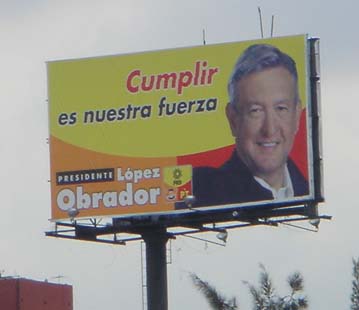 Important presidential race in progress. Above: Billboard for surprise leading candidate, a leftist-centrist who was the former Mayor of Mexico City. I'm here for a speech tomorrow to 2,000 presented by my old Brazilian pals, HSM. (TP, General Powell, and other of the usual suspects—and, at last, a female "guru"-star, Renée Mauborgne, coauthor of the highly regarded Blue Ocean Strategy.)