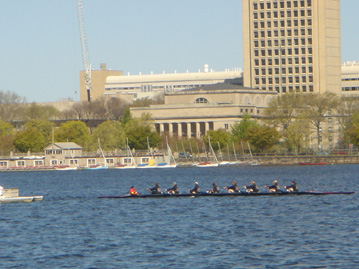 Gender differences are all-important to internal enterprise design—as well as to product development and marketing. As you know, that's been a major pet theme of mine for a decade. I still fight with a lot of people, including my wife, over the extent of such differences. As I see it, like global warming, the science is in—the differences are indeed profound.

Anyway, that's all prelude to one more, in this case semi-scientific, anecdote. Got back to my Boston house at 1 a.m. Saturday. Slept in, and didn't go for my Charles River run (power walk) until 10 a.m. It turned out to be official spring-cleaning day, and a ton of volunteers were out cleaning the winter's crap from the river's edge. After about a quarter or half mile, a little bell went off—and I shifted to semi-scientific mode. Here's my report of my next mile (approximately) of power walking.

91 women, 16 men.
12 of the 16 men were with a woman, each in a pair; the 4 by-themselves males consisted of a pair and 2 solos.
Do your sums, and that means that 79 of the 91 women were in all-female groups.
Only 2 of the women were solo (2 male solos out of 4 by contrast—but a wee sample). Though I wouldn't vouch for the precise accuracy of the next statistic, my rough recording shows that the median size of the groups of women was 3.

One point of these stats is to show how clear-cut such differences are. If I made a comment about the community-mindedness or group-mindedness of women, and the tally were 61 to 46 that would be one thing, though even then a big difference; 91-16 is, simply, a slam-dunk. And if 7 of the 16 guys had been solo or in an all-male group that would have been "interesting"—but not so compelling as the hypothesis that most of the guys (12 of 16) were probably only there because they'd been dragged by a girlfriend or flat-mate.

[Tom's photo at the top is an eight (crew) on the Charles River rowing past MIT.—CM]