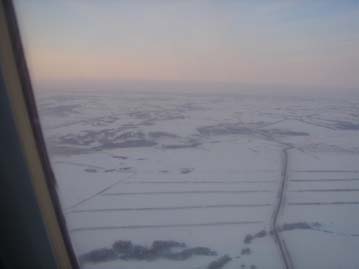 New record. Took 31 hours to get to Novosibirsk, Siberia, from Boston. Left on the 11th. Lost the 12th. (No international dateline, just travelin'.) Arrived on the 13th. (Boston-Frankfurt-St Petersburg via Lufthansa, St Petersburg to Novosibirsk via Air Siberia.) Featured a 9-hour layover in St Petersburg. (Alas, I was stuck in the terminal—instead of a quick visit to the Hermitage, I instead sat on the concrete floor reading cheap novels and working on my next PowerPoint; I didn't qualify for any of the clubs; couldn't eat either, as the currency kiosk was closed until whenever—and the shops wouldn't take dollars.) Novosibirsk, on the Trans-Siberian Railway, bisects a line drawn from Moscow to Vladivostock. It's an industrial and scientific city, Russia's third largest. Great growth in mfg occurred during World War II. As the Germans marched East, Stalin hurriedly moved as much critical manufacturing as possible out of the range of their bombers—Novosibirsk was a great beneficiary. Then, in the '50s a giant "science city" was planted here.

When I arrived, groggy, at 6 a.m., after those endless hours, I was greeted and jolted out of my sleepless stupor with a temperature of minus 13C, about plus 5F. I quickly noticed there were two kinds of people—glove wearers and barehanders. I decided to defend Vermont's honor—and went gloveless.

My afternoon walk revealed a lot of Stalinist heavy-on-the-concrete "architecture," and a smattering of wonderful wooden structures with ornate carving that I'd guess are classic Siberian. As usual in Russia, alas, smiling faces were noticeably absent. At one point, on my way into the hotel after my Power Walk, I politely held the door while about 10 women paraded out. Not one looked up and graced me with as much as a fleeting nod. (Okay, coulda been me.) Here, a long way from Moscow, English is simply not spoken by any but the relatively young. I'm even finding it almost impossible to communicate with the hotel staff. Problems notwithstanding, my hosts are lovely, and I suspect I'm the first management "guru" to venture this far afield—I look forward to giving my talk, though I can't imagine I'm relevant.