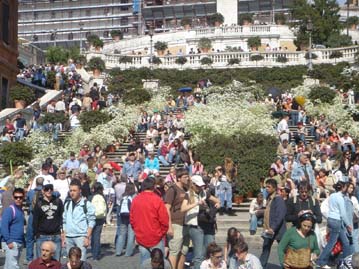 Age 63. Trip #1 to Rome. 7 days. TCI ... Total Cultural Immersion. (Different than "vacation.") I'm more exhausted than I was from Siberia! But I am also overwhelmed, filled with ... what? Amazement? Awe? Hope? Inspiration? Invigorated spirit? Arriving late last Saturday, I never imagined for a minute actually getting into St Peter's square for Pope Benedict XVI's first Easter mass the next day. But it happened—in fact, with minimal anti-social line butting (not on Easter!), I was able to get about halfway into the Square. Though I'm not a Catholic, the majesty and sense of the apex of the sacred was far more than "moving," far more than "once in a lifetime." In a world where the news consists mostly of violence, this Celebration of what it means to be human at its best was as uplifting a feeling as any I've ever had.

The days that followed were a magnificent blur of churches, art, insane amounts of food (I fast as I write), amazement at the vigor of Rome (is there any other major city where thousands of people wander down the center of thoroughfares 24 hours a day?), etc., etc.

The week was also cause for reflection. Today (Friday the 21st) is Rome's birthday. Yesterday I was at the site where Romulus dug a trench to first mark out the city in 754B.C. As I reflected on this Center of Western Civilization, and then read repeatedly of Iran and nukes and such, I wondered if what started in Rome 2,700 years or so ago might come to an end with a mushroom cloud in a not so distant future. Gloomy and defeatist? Well, not really—I'm not about to build a bunker. But man's ceaseless violence toward his fellow men (Rome had far more than its share, God knows) is cause for despair and anguish. 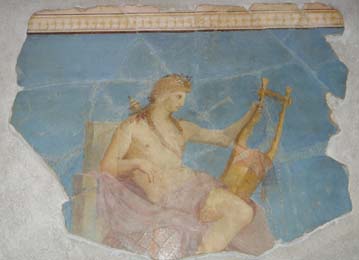