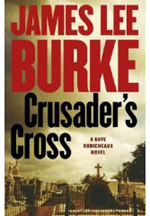 My pal Erik Hansen got me started on James Lee Burke. His newest potboiler is Crusader's Cross, featuring the crusty Cajun detective Dave Robicheaux. My primary source of relaxation is a steady stream of mysteries and spy novels.

It suddenly occurred to me that the James Lee Burke, John Harvey, Ian Rankin et al. protagonists have an incredible amount in common; moreover, what they have in common is a worldview that I share. I genuinely identify with their misfit, flawed heroes. (Though I hope not 100%—see below.) At any rate, here's my take on Dave Robicheaux et al.:

"Do" vs "Be"* (The task, not the title, is important.) (*Military strategist extraordinaire Col John Boyd: 2 kinds of people. "Do" ... focus obsessively on "the work itself"—and damn the torpedoes. "Be" ... obsess on the politics, the rank, the next promotion or assignment.)
Intuitive > Purely logical (routinely make strange connections)
Incredible passion for the work/Lingering idealism (though also cynical—paradox)
Persistent/Relentless (to a fault)
Like the long shots (Don Quixote-ish)
Stay on the case long after being ordered to drop it
Cases no one else wants (hot potatoes, dead ends, political nightmares, "unimportant" victims)
Constant thorns in the side of bureaucracy!!!!!!!!!!!!!!!!
Repeatedly exiled to professional "Siberia" (so annoyingly good and so annoying per se that others try to do him terminal professional harm)
Little in the way of career prospects
Have a "Godfather" (need internal protection—though even protectors lose patience)
Work mostly solo (Secretive)
"Work" "old pals network" to get info-leads beyond their charter
Master of the End Run!
Mentor (often to an incredibly talented young woman fighting the sexist culture)
Curmudgeonly
Often their own worst enemies
Drink too much
Don't work out enough
Sneak fast food
Excessive work has estranged them from family
More or less shabbily dressed
Drive shabby cars
Carry a secret/hidden motivator in their kit (e.g., someone close he feels he let down, leading to their death)
GET THE DAMN JOB DONE! (and don't expect/get much appreciation)

So what's the point, you ask. Not sure, really. Just struck me as interesting. With all the incessant talk about "leadership," how about a nod to curmudgeonly "doer-ship"????