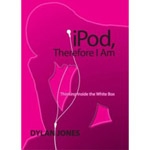 Will it be world domination next by the iPod?

Listening the to BBC's Radio 4 last week, I heard an animated conversation led by Dylan Jones, Editor of GQ magazine, who has recently published a book called iPod, Therefore I Am.

What interested me about the conversation was not the standard debate about the disruption that Apple has created in the music industry's business logic, it was the impact that this (apparently miraculous!) product has had on the lives of some people.

I say some people, because I am in the category of human being that has yet to succumb to the lure of the iPod ...! Jones contends that the iPod has transformed his relationship with music and the role that it plays in his life. Others in the studio enthusiastically agreed, which led me to wonder just how long I can continue to live life without one!

Are you an iPod enthusiast? What makes it special for you, and how has it affected your habits?

Or are you more like me? Wondering what the heck is so special about this little gadget? Surely it's just a modern day Walkman, isn't it?